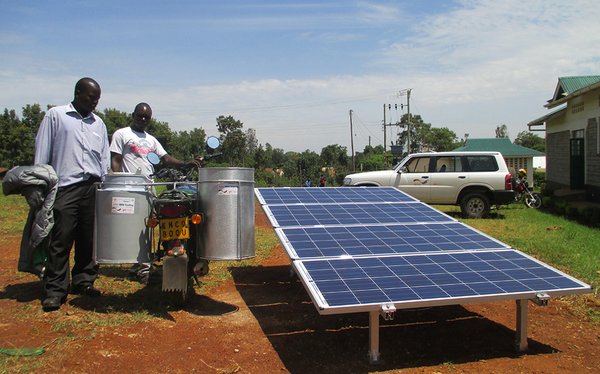 Insufficient cooling systems are among the chief constraints many small-scale dairy farmers in the Global South are faced with. Quite frequently, milk is rejected by collecting centres or processing plants. Germany’s University of Hohenheim is testing the efficacy of an environmentally friendly cooling system in Tunisia and Kenya.

In many African countries, milk is produced mostly by small and medium-sized dairy farms. These groups are mostly constrained by a lack of cooling systems and inadequate or reduced hygiene standards, which often leads to high microbial contamination of the milk. Under warm climatic conditions, raw milk can exceed the maximum bacterial count prescribed by food safety laws after only two to five hours. During the hottest periods of the year, a lack of quality can lead to high rates of rejected milk at collection centres or dairy processing plants. Milk cooling is essential to inhibit bacterial growth and stabilise milk until processing. In this context, an innovative agricultural solar-powered milk cooling system was developed to refrigerate and store milk on the farm and cool it during transportation. Since 2015, the system has been undergoing tests in two projects in Tunisia and Kenya (see Box at end of article).

Easy to handle and resource-friendly

The system consists of PV panels, a commercially available DC freezer equipped with a smart control unit (adaptive control unit, charge controller, data-logger and batteries), and two insulated milk cans with a 30-litre capacity each. The milk cans were designed with an integrated ice compartment which replaces the conventional lid and an external removable insulation. Twenty-five plastic containers of 2 litres volume each are filled with water and placed inside the freezer, which is 100 per cent solar-powered, to form ice blocks. When solar energy is available, the freezer works at maximal power, while it goes into a “sleep mode” at night to conserve the ice produced. The freezer is able to store 50 kg of ice, assuring 4 days of autonomy. Thus, a single smart freezer allows the production between 12 kg and 16 kg of ice a day, cooling around 60 litres of milk a day all year round.

The insulated milk cans that have been developed are filled with a maximum of 30 litres of milk, after which the ice compartment is placed inside the can. Up to four ice blocks fit into the compartment. The use of a removable insulation for the milk cans offers a flexible handling of the system. In the case of the morning milk, 30 litres of milk can be cooled down with 6 kg of ice (3 ice blocks) and preserved up to six hours. In the same milk-can model, 20 litres of the evening milk can be stored for up to twelve hours with the help of 8 kg of ice (4 ice blocks). Furthermore, it is possible to fill a clean insulated milk can with ice the night before and give it to the farmer to cool the morning milk. This also allows more farms to use the insulated milk cans without owning the solar cooling system.

The Tunisian dairy sector is relatively advanced. Usually, someone assigned as “The collector” is in charge of a number of farms in the region and follows a route to collect the milk from the farms and bring it to the collecting centre. The milk is collected twice daily, in the morning and in the evening. As yet, with no cooling system in the car, the collector has to reckon with the milk being rejected, and if he wants to arrive at the collecting centre with milk of good quality, he usually tries to speed up the collection and transport. Therefore, the cooling system offers the collectors more flexibility in transporting the milk without the current pressure they are under to avoid spoilage.

The first evaluation of the solar milk cooling system was performed in Sidi Bouzid in central Tunisia. Ten systems were assessed at seven farms. The farmers were eager to co-operate and engaged in testing the technology. They monitored the pH and temperature levels of the milk from the milking to the collecting centre.The assessments of the system in Sidi Bouzid show the system’s potential to provide fast cooling of raw milk from 35°C to less than 15°C within the first hour after milking and then maintain this temperature during transport until arrival at the collecting centre. This hampers bacterial growth during transportation. The farms testing the system are located up to 40 km away from the collecting centres, which means that the milk transport can take up to five hours. The cooling system is currently showing its ability to limit bacteria growth, preserve milk quality up to four times compared to un-cooled milk and ensure payment to the farmers.

The original milk-can prototypes introduced in the field had an incorporated insulation fixed to the milk-can walls. The farmers criticised this approach because of the increased weight and volume, which lowered handling comfort. Therefore, a new model was developed and introduced to the field in October 2016. Since the insulation is removable, this model can accommodate conventional milk cans. It allows better handling during milking and cleaning, which is often done by women in the region.

In rural areas in western Kenya, milk production per farm usually ranges between one and ten litres. Owing to this low level of production, milk is handled by small farmers that organised themselves in co-operatives. Bikes and motorbikes are used to transport the milk from the farm to the co-operative, which is used as a collecting centre, but when the farms are located 7 to 12 km away from the centre, intermediate collection points (satellites) are established. At the satellites, milk is bulked until it reaches 50-60 litres and then is transported to the collecting centre on a motorbike. Thus, the first modification of the system was to use specially designed plastic milk cans in order to facilitate transportation by bike and motorcycle.

A pilot system was installed at the SAM Malanga dairy co-operative located in Siaya County. The group of farmers showed an interest in the system and participated in the project right from the start. They responded very quickly to individual issues such as the transportation of the milk cans, and were willing to adopt the technology. For example, they built an adaptor to carry two milk cans on the motorbike. In 2017, two more systems will be installed and evaluated in a selected farm and satellite respectively, covering all stages of the milk value chain before processing. The installed cooling system is already showing great potential to significantly reduce bacterial growth during transport and ensure the payment to the farmer. The activities planned are based on different business models that will focus on the overnight storage of evening milk and the evaluation of the system in the early stages of milk handling (satellites and farms). Private sector involvement in the country- and region-wide up-scaling of the system is a long-term goal of the project.

The solar milk cooling system is showing a great potential to overcome the challenges posed by short-term on-farm storage of milk and cooling during transportation. In addition, the pilot testing in Tunisia and Kenya has shown that this technology is a user- and environmentally-friendly solution for remote regions not connected to the grid. The scheme offers the opportunity to support the milk value chain at any stage by increasing productivity and giving access to premium prices or opening additional markets.

Background
The solar-powered milk-cooling system was conceptualised by the University of Hohenheim, Germany, with funding support from Deutsche Gesellschaft für Internationale Zusammenarbeit (GIZ) on behalf of the German Federal Ministry for Economic Cooperation and Development (BMZ).

Implementation in Tunisia was embedded in the GIZ programmes ‘Innovation Transfer into Agriculture – Adaptation to Climate Change’ (ITAACC) and ‘Sustainable Energy for Food – Powering Agriculture’. The International Center for Agricultural Research in the Dry Areas (ICARDA) and the National Agricultural Research Institute of Tunisia (INRAT) coordinate the project at national level.

The pilot testing in Kenya is funded by the Programme of Accompanying Research for Agricultural Innovation (PARI) while the coordination is carried out by the GIZ programmes ‘Green Innovation Center for the Agriculture and Food Sector’ and ‘Sustainable Energy for Food – Powering Agriculture’.

Besides the aim to assess the potential and acceptance of the system under real conditions, business models are studied which would allow the introduction of the technology with locally produced components.