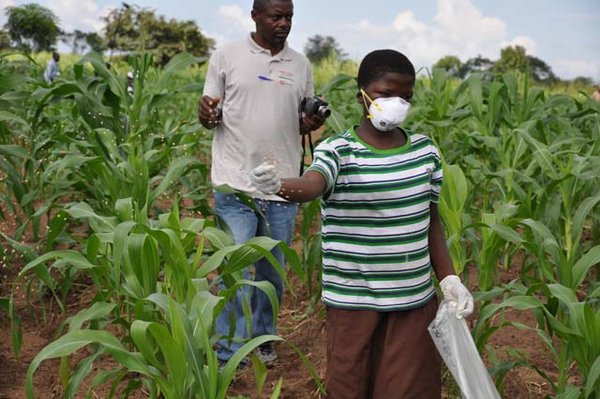 At this year’s Tropentag in Berlin, Germany, the International Institute of Tropical Agriculture presented some examples of how smallholders can make their production more efficient. Here, it also became apparent that the biggest challenge is not the technology as such but its implementation in practice.

“Deriving a livelihood from smallholder agriculture in Sub-Saharan Africa is not easy,” said Bernard Vanlauwe from the International Institute of Tropical Agriculture (IITA) during this year’s Tropentag in September in Berlin, Germany. And he continued: “Intensification of agriculture is necessary. But we need to do it in a smart way.”

Taken from the atmosphere

One example of this is enhancing grain legume yields with the right combination of fertiliser. Here, the ability of legumes to bind atmospheric nitrogen plays a crucial role. This ability can be supported by inoculating the plants with Rhizobium bacteria. The researchers have demonstrated that rhizobia inoculation can yield benefits worth 50–75 US dollars (USD) for an investment of only 3–5 USD but with small amounts of phosphorus fertiliser to ensure acceptable soybean yields. Yields of groundnut, cowpea and common bean are often doubled with small quantities of phosphorus. However, making the most of the benefits offered by improved grain legume varieties requires careful attention to crop management, including rhizobial inoculant, balanced fertilisation, timely planting, weeding and pest management.

The increase in yield that can be achieved by adding an inoculant is demonstrated by a preliminary market analysis for Nigeria conducted by IITA. It arrives at the result that an additional 150,000 metric tons per year is possible if the seed for an area of 500,000 hectares is treated with soybean inoculant. This additional yield would correspond to a market value of around 93 million USD. The scientists maintain that proof has been supplied of a clear link between the increases in production and nitrogen fixation of grain legumes.

According to IITA researcher Bernard Vanlauwe, in purely technical terms, a lot of knowledge is already available on enhancing production. However, it is not only up to the smallholders to intensify African agriculture. The private sector and government institutions must also assume responsibility for this to succeed. And international agricultural research institutions such as IITA have to be actively involved in this as well. In Berlin, a certain amount of self-criticism was voiced in this respect. “In the past we delivered solutions and then we handed them over. But over the years we saw that’s not the way the world turns,” said Vanlauwe. “So we develop solutions, and we also invest a lot of energy to facilitate access to these solutions for smallholders. For example, we have established a business incubation platform in Ibadan in Nigeria to show the private sector that it makes sense to invest in some of the products that developed our research.”

On the way to the field

One of IITA’s biggest success stories is the biological control of the cassava mealybug. In Africa, it became the most important pest of cassava during the 1970s and 1980s. This was particularly dramatic, because cassava is one of the most important staple crops in sub-Saharan Africa. IITA Deputy Director General for Research Ylva Hillbur hopes that IITA will be able to score a further pioneering success with aflasafe, the new biological fungicide to combat Aspergillus flavus. This poisonous fungus infests e.g. maize and groundnuts, and it has no smell and is virtually invisible. The fungus is a considerable human health hazard. IITA has developed aflasafe for African agriculture. The first commercial production facility has now been set up in Nigeria. Other African countries are to follow.

IITA has developed a special marketing concept to really ensure sales of the product. “We are working with implementers that market the aflasafe to farmers”, says Ylva Hillbur. “They usually work with farmers’ groups. And it could be a package – aflasafe, maize and some extension support. So we sell the aflasafe to these implementers, and they in turn sell it to the farmers. The project then does lobbying to ensure that the farmers get premium prices for their product. So they negotiate with Nestlé, for instance, for baby food or with the poultry industry. So the farmers get more because they invest more. The project also checks the final harvest. If aflasafe is being applied, then the project pays a premium to the implementers.”