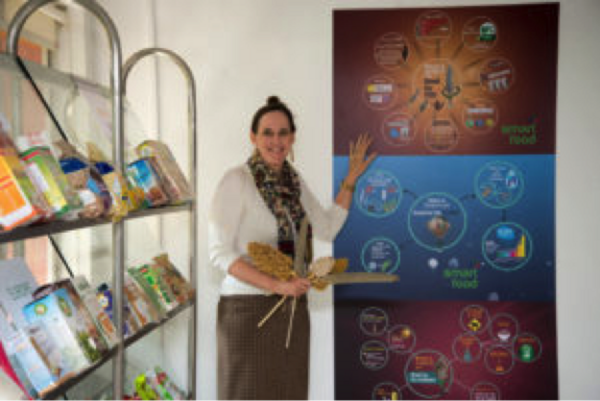 Smart Food will be taken forward as a partnership with many organisations in India and in African countries.
Photo: ICRISAT

‘Smart Food’, an initiative by the International Crops Research Institute for the Semi-Arid Tropics (ICRISAT) which will initially focus on popularising millets and sorghum, has been selected by “LAUNCH Food” as one of the winning innovations for 2017. “Smart Food” includes sorghum, millets, pigeon-pea, chickpea, cowpeas, and groundnut as these grains are highly nutritious and drought resilient.

ICRISAT, the International Crops Research Institute for the Semi-Arid-Tropics, announced in late February, that the LAUNCH Food competition has awarded its “Smart Food” initiative. The global recognition and mentorship support of LAUNCH Food will help Smart Food to achieve major impacts globally by promoting the demand for millets and strengthen the value chains while ensuring that smallholder farmers benefit says ICRISAT.

The Smart Food initiative is founded by ICRISAT and aims to build food systems where the food is “good for you (highly nutritious), good for the planet and good for the smallholder farmer”.

LAUNCH Food is a global open innovation programme, where eleven innovations are selected each year for mentoring and linked with high-level experts and organisations to accelerate the innovation. This year there were 280 submissions from 74 countries. The LAUNCH Food innovators presented and discussed their innovation with key industries and investors at an event in San Francisco in March.

LAUNCH was founded in 2009 by NASA, the U.S. Agency for International Development, the U.S. Department of State and NIKE, Inc., who joined together to identify, showcase and back innovative approaches to sustainability challenges. LAUNCH Food is supported by the Australian Department of Foreign Affairs and Trade and the US Agency for International Development (USAID).

“Millets, including sorghum, are the first Smart Food we are focusing on. They are highly nutritious, have a low water and carbon footprint, and have so many multiple uses that are yet untapped,” said Smart Food initiator and leader, Joanna Kane-Potaka, Director Strategic Marketing and Communication, ICRISAT. “They have been traditional foods across India and many countries in Africa, but with low investments their value chains are significantly underdeveloped, which makes it more difficult for the farmers to invest. Over time, they have become labelled as an old fashioned food. We plan to take a different approach and drive demand by first creating a new image and buzz around millets.”

According to ICRISAT, Smart Food will be taken forward as a partnership and many organisations have already teamed up to popularise millets. In India, this includes the Indian Institute of Millet Research (IIMR), the National Institute of Nutrition (NIN), MS Swaminathan Research Foundation (MSSRF) and the Self-Employed Women’s Association (SEWA). In Kenya, work has started under the USAID Feed the Future Programme focusing on the Smart Food – millets, sorghum and selected pulses. Efforts have been initiated in rural areas to integrate Smart Food into messages by health workers and encourage new, creative ways to cook with these crops. A social media campaign has been launched and a Smart Food reality TV show started as a competition to develop modern recipes using Smart Food. Processors are also being engaged to develop healthy convenience Smart Food products.