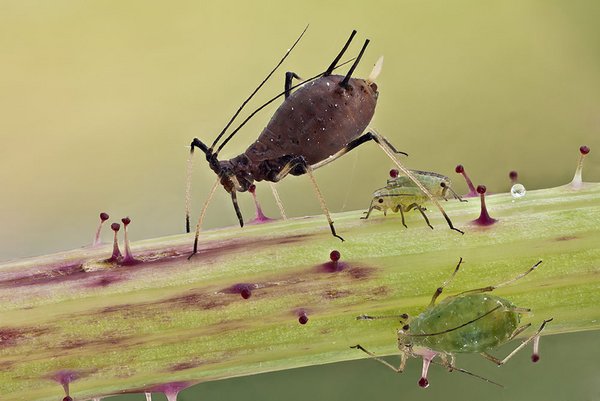 Evolutionary biologists and law scholars in Germany and France have criticised a US project aimed at developing the use of insects to spread genetically modified viruses to crops. The viruses featured in the “Insect Allies” programme are meant to alter crop plant chromosomes through genome editing. However, there are fears that the method could also be put to military use.

Insect Allies was launched by the US Department of Defense in 2016, whose Defense Advanced Research Projects Agency (DARPA) was provided with a total of 45 million US dollars to run the programme over a four-year period. According to Programme Manager Dr Blake Bextine, Insect Allies aims to develop “scalable, readily deployable, and generalizable countermeasures against potential natural and engineered threats to the food supply with the goal of preserving the US crop system”. Bextine warns that naturally occurring threats to crops, such as pathogens, drought, flooding or frost, can quickly jeopardise national security, and refers to an even greater danger of “threats introduced by state or non-state actors”.

The rationale for Insect Allies is simple. “Insects eat plants, and insects transmit the majority of plant viruses,” Bextine explains. “DARPA plans to harness the power of this natural system by engineering genes inside plant viruses that can be transmitted by insects to confer protective traits to the target plants they feed upon.” Following this concept, the Insect Allies programme comprises three technical areas: viral manipulation, insect vector optimisation and selective gene therapy in mature plants. Viruses are genetically engineered to enable them to edit the chromosomes of targeted crops and give them new resilience genes. These viruses, known as Horizontal Environmental Genetic Alteration Agents (HEGAAs), are carried by the insects, which have also been genetically altered, to crop plants growing in fields. Here, they enter the chromosomes of the plants and can edit their genome. Applying HEGAAs to mature plants is expected to yield effects within a single growing season, and could make crop plants less susceptible to pests or inclement weather within a very short space of time. “Such an unprecedented capacity would provide an urgently needed alternative to pesticides, selective breeding, slash-and-burn clearing, and quarantine, which are often ineffective against rapidly emerging threats and are not suited to securing mature plants,” Bextine maintains.

The 14 US research facilities funded in the programme include the Boyce Thomson Institute at Cornell University, New York, Pennsylvania State University, Ohio State University and the University of Austin, Texas. Bextine explains that the research teams involved in the project apply their expertise in molecular and synthetic biology in closed laboratories, greenhouses or other secured facilities, and he stresses that the programme observes several levels of biosecurity and biosafety at each of its levels. According to DARPA, the goal of Insect Allies is to “stably transform multiple mature crop plants in a complex, multi-species plant and insect community with enhanced trait(s) of agricultural interest” by mid-2021.

Crops to be modified while growing

Phase One of the programme, to be concluded in late 2018, is to result in the successful delivery of a genetically modified virus to an insect. Phase Two, scheduled for late 2018 to early 2020, would involve genetically adjusting the viruses, insects and plants so that gene delivery works in a monoculture. Phase Three would then last until mid-2021, and would concentrate on observing the project on a larger scale in complex crop environments. Current experiments focus on maize and tomatoes, and leafhoppers, whiteflies and aphids are among the insects used as disease vectors.

So far, the use of genetically modified organisms in farming has been restricted to farmers using commercial seeds that were genetically engineered in laboratories. A farmer opts for a seed type the plants of which are suited to survive in conditions that the farm is expected to face, such as drought or certain pests. Insect Allies centres on performing genetic engineering in the fields, giving farmers the opportunity to have the properties of their crops altered at any time, which would amount to a radical breakthrough in farming.

However, scientists from the Max Planck Institute for Evolutionary Biology in Plön, Germany, and the Institut des Sciences de l’Evolution de Montpellier in France as well as legal scholars from Germany’s University of Freiburg have raised a number of concerns in a study published in the journal Science. Dr Guy Reeves, a researcher at the Plön institute, and lead author of the study, complains that the programme has received hardly any attention in public. He and his co-authors call for a broad social, scientific and legal debate on the issue of Insect Allies.

Reeves stresses the danger of losing control of the insects carrying the specially engineered virus, and he argues that using traditional overhead sprays to deliver HEGAAs is much safer. No global regulatory framework is in place to support insect transportation of HEGAAs to crops, and without appropriate supervision, Reeves fears that mishaps could occur. He also points out that killing or sterilising a plant using genome editing is far easier than making it herbicide or insect-resistant.

The authors of the new study maintain that knowledge gained from the Insect Allies programme could be re-purposed and used for biological warfare, e.g. through switching off genes, which is usually easier than optimising them. A simplified version of the DARPA programme could therefore find military application as a means of making plants die.

In 1975, the Biological Weapons Convention entered into force. The 182 states that have so far become party to the Convention, including the USA, undertake never to develop or produce microbial or other biological agents or toxins “whatever their origin or method of production, of types and in quantities that have no justification for prophylactic, protective or other peaceful purposes”. They also commit not to develop “weapons, equipment or means of delivery designed to use such agents or toxins for hostile purposes or in armed conflict”. The researchers argue that the insects employed to deliver the viruses in the DARPA programme might be perceived as such “means of delivery”.

“Because of the broad ban of the Biological Weapons Convention, any biological research of concern must be plausibly justified as serving peaceful purposes,” states Professor Silja Vöneky, who holds the Chair of International Law and Ethics of Law at the University of Freiburg. “The Insect Allies programme could be seen to violate the Biological Weapons Convention if the motivations presented by DARPA are not plausible. This is particularly true considering that this kind of technology could easily be used for biological warfare.” The new study also warns that such new weapon technology could encourage other countries to initiate similar insect programmes for military purposes.

Bextine rejects any suggestions that DARPA is developing biological weapons, but acknowledges concerns about potential dual use of technology. “Those concerns are precisely why we structured the Insect Allies programme the way we did, as a transparent, university-led fundamental research effort that benefits from the active participation of regulators and ethicists and proactive communication to policy-makers,” he explains.

As a US Defense Department agency, DARPA is only too aware of dual purpose issues. Created as the Advanced Research Projects Agency (ARPA) in 1958 by then US President Dwight D. Eisenhower in response to the Soviet Union’s launch of Sputnik 1 a year before, its mission was to form and run ground-breaking research and development projects reaching way beyond immediate defence requirements. Even in its early stages, ARPA was playing a key role in preparing technologies such as today’s Global Positioning System (GPS), and later on, it supported the creation of the Internet. ARPA became DARPA in 1972.

The new crop protection programme appears to fit in with DARPA’s general research policy. “We created Insect Allies specifically to develop technology that can deliver positive, protective traits to plants to help them survive unanticipated and/or fast-moving agricultural threats,” the Agency recently stated. “We see it as a critical addition to the national security toolkit, part of a layered strategy to preserve the security of the food supply.”

Referring to insect transportation of HEGAAs, DARPA maintains that this is the only viable solution, since overhead spraying would require increased spraying infrastructure, which is not available to all farmers. But Jason Delborne, a genetic engineering expert and Associate Professor at North Carolina State University, USA, disagrees. “The infrastructure and expertise required for spraying agricultural fields – at least in the US context – is well established, and this delivery mechanism would offer greater control over the potential spread of a HEGAA,” Delborne claims.

Mike Gardner is a freelance journalist specialising in development,  environmental and higher education issues,  and is German Correspondent for UniversityWorldNews.
Contact: mike.gardner@zaehlwerk.net