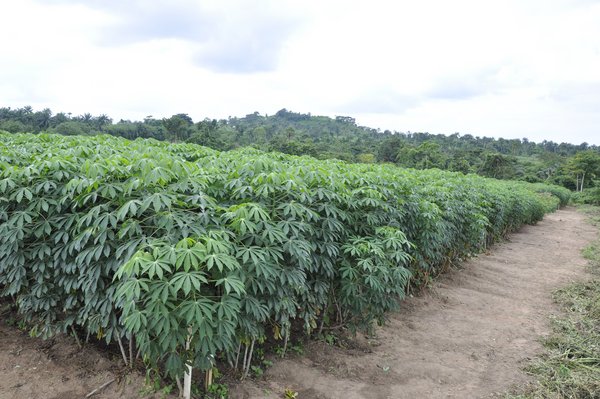 The IITA study is a milestone in the efforts to revive cassava production in East, Central, and Southern Africa where the cassava brown streak and cassava mosaic diseases are still a major problem.
Photo: © IITA

Why are the two cassava varieties - Namikonga and Albert - grown by farmers in Tanzania, able to withstand the devastating Cassava Brown Streak Disease (CBSD) and Cassava Mosaic Disease (CMD), respectively, while other varieties cannot? A team of scientists at the International Institute of Tropical Agriculture (IITA) have been studying their DNA and have successfully identified the genetic markers linked to their resistance to each of the viral diseases. The markers can be used to speed up the often long and expensive conventional breeding of cassava varieties with dual resistance to the diseases.

Namikonga and Albert, which are genetically related, have been grown by farmers in areas that are hotspots for the two viral diseases for many decades and have shown high resistance despite being subjected to the diseases over a long period. Namikonga is tolerant to CBSD but highly susceptible to CMD while in contrast, Albert is highly susceptible to CBSD but resistant to CMD.

The international team, drawing scientists from Tanzania, Kenya, South Africa, and the United States of America, crossed the two Tanzanian varieties and studied a large population of the progeny over two seasons in two disease hotspot areas in the country. They detected the main resistance to CBSD on chromosomes 2 and 11 and that of CMD on chromosome 12. Several other genomic regions in different chromosomes had a minor influence on the expressed resistance.

The team has published their findings in a paper “QTL associated with resistance to cassava brown streak and cassava mosaic diseases in a bi-parental cross of two Tanzanian farmer varieties, Namikonga and Albert” in Theoretical and Applied Genetics: International Journal of Plant Breeding Research.

CMD and CBSD are among the greatest constraints to cassava production in East, Central and Southern Africa where cassava is a major crop providing both food and, income for millions of smallholder farmers, because nearly all cassava varieties grown by farmers are susceptible to either one or both diseases.
Breeding through marker-assisted selection reduces costs and shortens the breeding cycle

“The studies have enabled us to better understand the location of genes we suspect are associated with resistance to CBSD in the DNA of the farmer-preferred cassava variety, Namikonga, and CMD in the variety Albert. Once validated, this will help speed up breeding through marker-assisted selection (MAS) which shortens the breeding cycle and reduces the offspring population that breeders have to work with. Breeders will be able to quickly narrow down from the thousands of offspring to only those with the desired markers,” says Esther Masumba, a molecular breeder from the Ministry of Agriculture, Livestock and Fisheries, Tanzania. She was part of the research team.

Most of the cassava breeding programmes in Africa use purely conventional breeding methods that are laborious and expensive due to long breeding cycles and the need for large field trials. The application of molecular markers in breeding and the selection of crop varieties can both reduce breeding time and costs.

“We are very happy with the findings of our studies which are a result of over six years of research. It is an important milestone in the efforts to revive cassava production in East, Central, and Southern Africa where the two diseases are still a major problem that continues to threaten the region’s food security”.

“For West Africa, where there is great fear of CBSD spreading with devastating effects on the food security, the markers can assist in pre-emptive breeding,” adds Morag Ferguson a molecular breeder from the International Institute of Topical Agriculture (IITA) and also one of the team members.

The research team will now continue to validate these markers for their applicability in marker assisted breeding (MAB).