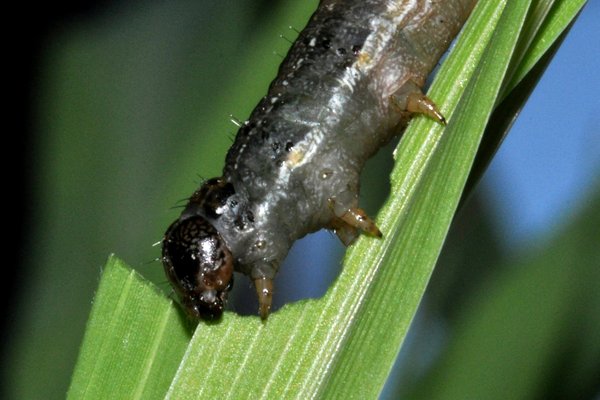 Researchers have succeeded in sequencing one of the first genomes of a moth belonging to the superfamily Noctuoidea.
Photo: © CEA / INRA

An international consortium has sequenced one of the first genomes of a moth from the superfamily Noctuoidea: Spodoptera frugiperda, or fall armyworm. Maize, rice and soybeans are among the plant species attacked by this pest.

Spodoptera frugiperda is a moth belonging to the superfamily Noctuoidea. It is also called Armyworm because the caterpillars are sometimes so numerous that they form “carpets” on the ground, similar to an army on the march. Unlike the majority of herbivorous insects, the Armyworm is highly polyphagous: it attacks over one hundred plant species, including crops (maize, rice, sorghum, cotton and soybean).  The moth moves in large swarms and is able to fly long distances.

Until now limited to America and the Caribbean, Spodoptera frugiperda is estimated to cause 600 million dollars in damage in Brazil every year according to the UN Food and Agriculture Organization (FAO). In America, 67 cases of insect resistance to pesticides have been identified to date, illustrating the difficulty of controlling these populations. Since January 2016, it has become invasive in Africa, where it destroys maize crops in 21 countries in the southern and western parts of the continent. It is currently also a threat to the European continent.

Sequencing of one of the first genomes Spodoptera frugiperda

In the framework of an international public consortium called Fall Armyworm, researchers of the French research institute INRA, in partnership with the French Alternative Energies and Atomic Energies Commission (CEA), sequenced the genome of Spodoptera frugiperda. They described one of the first genomes of a moth belonging to the superfamily Noctuoidea and, more specifically, studied three types of gene families5 in this insect.

Scientists first analysed a group of genes involved in the recognition of host plants which allows them to feed or lay their eggs. By comparing the genome of S. frugiperda with the available genomes of (non-polyphagous) Lepidoptera, researchers found an expansion in the number of genes (230 versus 45 to 74 in other Lepidoptera) encoding a certain type of taste receptor. The latter are located on the moth’s trump (proboscis) or under its legs. They are thought to allow it to detect toxins or bitter compounds produced by plants. The only insect known to have such taste receptor expansions is an omnivorous beetle, the red flour beetle, another insect that attacks a wide range of foods.

Researchers also looked at other families of genes necessary to cope with the chemical defences that plants overproduce when they are attacked (detoxification). They discovered expansions in two of the four major gene families for detoxification (encoding cytochrome P450s [CYP] or glutathione-S-transferases [GST]). These are the same genes that can be involved in resistance to pesticides.

Lastly, scientists described a group of genes involved in the digestion of plant tissues.

For the purpose of the study, two genomes of S. frugiperda were analysed: two genomic variants based on the insect’s host plant – the maize variant and rice variant, which occur throughout their range of distribution in America.  The researchers found differences between the variants in terms of the number and sequence of genes necessary to detoxify the poisons emitted by the plants and in the genes necessary for digestion.

This data was made available to the international scientific community to allow specialists to identify which variant of the moth is invading Africa. Moreover, this work will also make it possible to envision new biological control methods. And it will improve our understanding of the mechanisms by which pesticide resistance appears.

The genome of a related species in Asia also sequenced

Researchers at INRA have contributed to the analysis of the genome of Spodoptera litura, an Asian ‘cousin’ of Spodoptera frugiperda as well. This polyphagous pest found in Asia attacks a hundred or so crops, including rice, cotton and vegetables. The sequencing of its genome appeared the same day in Nature Ecology and Evolution (doi:10.1038/s41559-017-0314-4.).