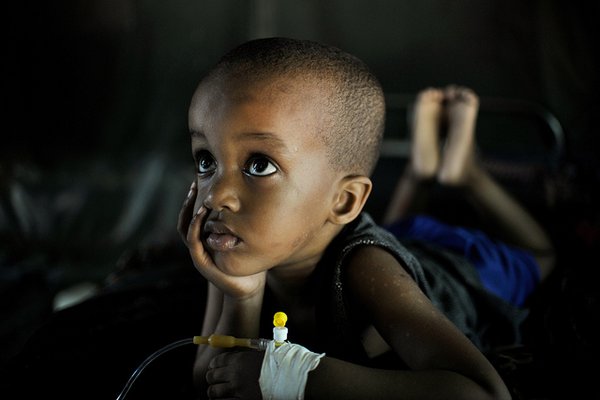 A boy, suffering from Malaria, recovers at a clinic in Mogadishu, Somalia.
Photo: © Tobin Jones /flickr

Recommendation for approval of the malaria vaccine Mosquirix

The malaria vaccine Mosquirix receives positive scientific opinion from EMA in July 2015. It could be used for vaccination of young children, together with established antimalarial interventions.

Mosquirix is intended for use in areas where malaria is regularly found, for the active immunisation of children aged 6 weeks to 17 months against malaria caused by the Plasmodium falciparum parasite, and against hepatitis B. After decades of research into malaria vaccinations, Mosquirix is the first vaccine for the disease to be assessed by a regulatory agency.

The CHMP highlighted in its opinion that Mosquirix is for use in line with official recommendations that take into account the risk of Plasmodium falciparum malaria in different geographical areas and available malaria control interventions. These recommendations will be defined by the World Health Organization (WHO) and regulatory authorities in the non-EU countries where the vaccine would be used.

According to evidence derived from a large clinical trial conducted in seven African countries (Burkina Faso, Gabon, Ghana, Kenya, Malawi, Mozambique and Tanzania); Mosquirix provides modest protection against Plasmodium falciparum malaria in children in the 12 months following vaccination. The vaccine was effective at preventing a first or only clinical malaria episode in 56 per cent of children aged between 5-17 months and in 31 per cent of children aged 6-12 weeks. The efficacy of the vaccine decreased after one year. The safety profile of the vaccine was considered acceptable.

Based on the results of the trial, the CHMP concluded that despite its limited efficacy, the benefits of Mosquirix outweigh the risks in both age groups studied. The CHMP considered that the benefits of vaccination may be particularly important among children in high-transmission areas in which mortality is very high. Because the studies showed that Mosquirix does not offer complete protection, and the protection it provides decreases in the longer term, it is important that established protective measures, for example insecticide-treated bed nets, continue to be used in addition to the vaccine.

The CHMP also agreed a follow-up programme with the company to ensure that the safety and effectiveness of Mosquirix is continuously monitored as described in the risk management plan.