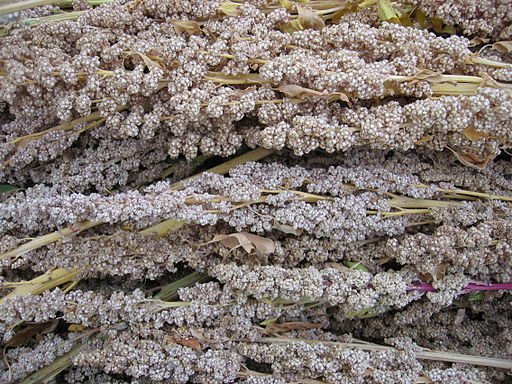 Quinoa is a naturally salt-tolerant plant. Special bladder cells on the surface of the leaves absorb salt. The process is controlled by specific gene activity.
Photo: © Michael Hermann - http://www.cropsforthefuture.org/

Quinoa – a role model for salt-tolerance

The Andean high nutritive crop Quinoa can tolerate salt. An international team of researchers have now found an explanation for this. Special bladder cells on the quinoa leaves remove salt from the plant metabolism. They also identified specific gene activities that underlie the salt-storing mechanism.

Due to climate change more and more arable land is drying out, and subsequently requires irrigation in order to grow crops. However, steady and heavy irrigation causes soil salination, because the salts that are dissolved in the water are diffused into the soil and remain there, after the water had evaporated. The salt in turn stunts the growth of the crops and, if left untreated, can even turn soils infertile.

Considering the growing acreage that already requires heavy irrigation or will soon do so because of global warming, stunted growth of crops endangers the possibilities to feed of a growing world population.

An international research team headed by Rainer Hedrich, plant scientist and Professor at the Julius Maximilians University Würzburg, Germany, analysed the salt-tolerant quinoa plant. Quinoa (Chenopodium quinoa), originally a native of the Andean Highlands, is equipped with special bladder cells on its leaves that store excessive salt and thus protect the plant’s metabolism, enabling it to grow even on salinated soil. By comparing the quinoa genome to other species, the researchers identified specific gene activities that underlie the salt-storing mechanism. The findings are published in the journal “Cell Research”.

“All approaches so far to breed salt-tolerant plants must be considered more or less as failures,” says Hedrich. According to him, their mistake was to grow crop plants on saline soils first and then try to identify salt-tolerant lines by assessing the surviving plants.

Thus, Hedrich and Sergey Shabala, Professor at the University of Tasmania, Australia, analysed the salt-tolerant Quinoa and found that the plant absorbs salt from the soil and stores it in bladder-shaped cells on the surface of its leaves. This protects the salt-sensitive metabolic processes, and the plant grows well even on salinated soils. The cells have a diameter of almost half a millimetre, which means they can be seen with the naked eye. Their storage capacity is up to 1,000 times higher than that of any normal cell of the leaf surface.

Another research team, headed by Jian-Kang Zhu, Professor at the University of Shanghai in China, decoded the genome of the salt-tolerant plant. Hedrich’s team then compared the active genes of leaves and bladder cells. The result: certain genes in the bladder cells are always active, with or without salt treatment. In contrast, in other species, the same genes are only active when the plant is stressed. These genes include transporters carrying sodium and chloride ions into the bladder cell.

Next step: salt-tolerant spinach via crossbreeding?

Now that the genes responsible for the plant’s salt tolerance are identified, they will further the breeding of other salt-tolerant plants. “The first step has been taken,” says Hedrich. “We will now use a combination of developmental genetics and the functional analysis of salt transport proteins to understand the molecular mechanisms that produce and maintain the salt tolerance in quinoa.”

About 2,000 wild and cultivated varieties of quinoa are known to date, some of them equipped with a very large and others with a very small number of salt bladders. The researchers now aim to compare and contrast the activities of the already identified specific genes. The ultimate outcome of their work might not only be the breeding of quinoa varieties with an even higher salt tolerance, but also the crossbreeding of salt tolerance genes into related crop plants such as sugar beets or spinach.