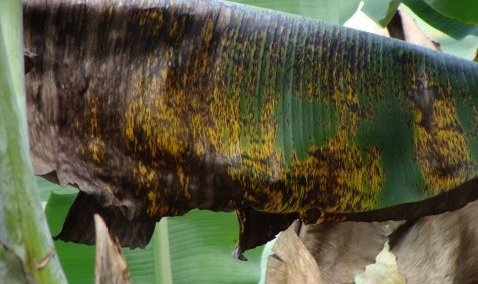 A leaf infested with black sigatoka.
Photo: © University of Wageningen

Putting an end to a banana disease

Black Sigatoka is one of the most dreaded diseases in banana cultivation. Scientists at the University of Wageningen have now decoded the hereditary matter of the plants and hope to be able to soon check the disease with this new information.

The banana is a very popular fruit, ranking fourth among the most frequently eaten crops, and even first among the “non-grain” species. However, funguses tend to take a liking to it as well. One of the most dangerous diseases, Black Sigatoka, is caused by the ascomycete Pseudocercospora fijensis (formerly Mycosphaerella fijensis). It affects the leaves, blackening the banana tree’s photosynthesis apparatus, and leads to considerable harvest losses world-wide. The fungus, which spreads in the air, also encourages prematurity among the trees, so that the plants suffer losses in quality. Bananas from infested plantations may no longer be exported, and the losses can threaten the livelihoods of smallholders. The Cavendish banana, globally the most widespread variety, is particularly susceptible to the Sigatoka.

The plantation operators are not completely at the mercy of the fungus. Those who can afford it prevent the disease by applying fungicides up to 50 times per crop. However, these fungicides harm the environment, and according to the University of Wageningen in The Netherlands, they cost the branch up to 400 million USD a year. Moreover, the frequent applications of fungicides lead to a rapid evolution of fungicide-resistant strains within populations, causing disease-control failures throughout the world.

“Black Sigatoka has considerable social, ecological and economic impacts,” explains Gert Kema, Professor of Tropical Phytopathology at Wageningen. His team have now decoded the fungus’s DNS and are attempting to understand interaction between it and the banana. If they succeed, breeders will be able to create special varieties that are resistant to the fungus. However, looking at the genetic code can also contribute to the development of more environmentally friendly fungicides and herbicides, which would mean better protection for plantation workers and local residents.

In the ascomycete, the scientists have found a section that triggers a recognising process in the “Calcutta 4” wild banana variety. Calcutta 4 “knows” when it is being attacked by Pseudocercospora fijensis and can encapsulate the fungus, preventing its spreading in the leaf. Tomatoes can identify the same DNS section as an attack and protect themselves. The section identifying the fungus in the tomato gene is already known as a receptor – and with the latest breeding method, it could also be implanted in the banana’s DNS as a tool.