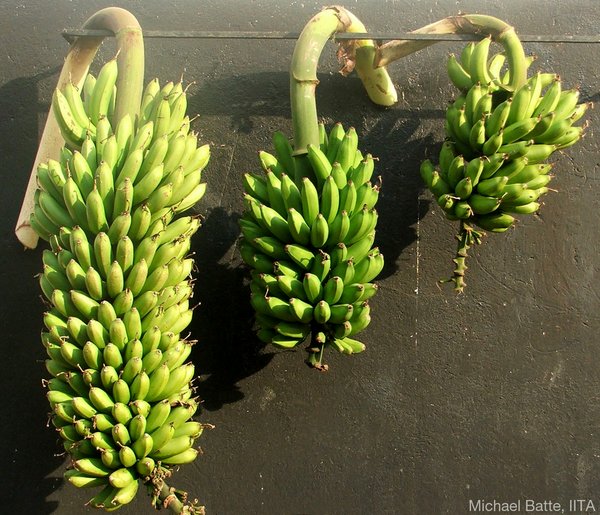 Project to boost banana production in East and Central Africa

The aim of a five-year NARITA bananas project is to boost ongoing efforts to deliver high-yielding, disease-resistant and superior cooking banana varieties to increase food security and improve incomes of smallholder farmers in the African Great Lakes region.

According to the International Institute of Tropical Agriculture (IITA), despite banana having found its stronghold as a staple crop and source of income in the Great Lakes region of Eastern Africa; its yield is low, and production is hindered by a myriad of pests and diseases.

In May 2015 IITA funded a five-year initiative through a Bill & Melinda Gates Foundation grant to develop new disease and pest resistant hybrid varieties of two popular cooking banana types (Matooke and Mchare) grown by farmers in East Africa. The initiative is led by IITA in collaboration with the Ugandan National Agricultural Research Organisation (NARO) and the Agricultural Research Institute (ARI) of Tanzania.

The initiative builds on more than 20 years of breeding efforts by NARO and IITA that led to the development of a set of 25 high-yielding hybrids related to East African highland bananas, called NARITAs, after the names of the two organisations. According to IITA, these new hybrids have so far been tested on station in Uganda with promising results, but need to be further assessed before they are released to farmers.

Moreover, Bioversity International will co-ordinate the field testing of NARITA hybrids in three sites in Tanzania and two sites in Uganda. Working with farmers and researchers, the study is to determine their potential for adoption by farmers and consumers.
According to Bioversity International experts, two types of trial will be run in parallel: researcher-managed trials to gain data on cultivar performance (mother trials) and farmer-managed trials to facilitate access to and testing of the new varieties by farmers (baby trials). Farmers are to be invited to visit the mother trials and rate the NARITA hybrids several times during the growing cycle and after harvest. Farmers will be able to select three to five NARITAs that they would like to test in their own fields.

Consequently, the baby trials will be fully managed by farmers on their own farms, who are to rate the performance of the NARITAs under their actual conditions and in comparison with their local cultivars. Neighbouring farmers will visit the trials, and local processors and traders, as well as consumers, are to help test the post-harvest processing and quality traits.