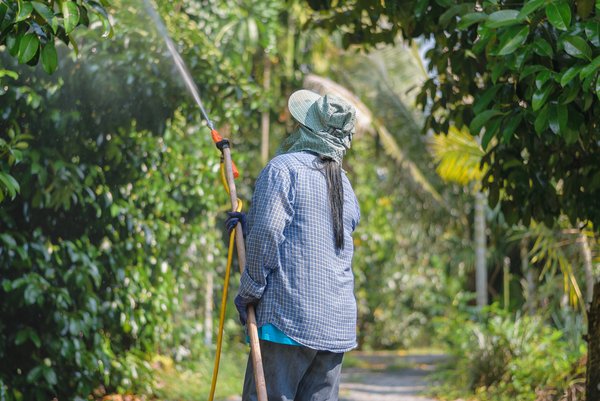 In Brazil, crops are contaminating food and water consumed by both people and livestock, researchers believe.
Photo: Shutterstock

Globally, Brazil applies the second highest amount of pesticides. Their use has soared since 2000, as has the incidence of colon cancer deaths. Now, a bill aiming to deregulate pesticides is moving through Brazil’s Congress.

Colon cancer is the third most common type of cancer world-wide, accounting for about ten per cent of all cases. It is more common in developed nations, but a few countries in Latin America, including Argentina, Brazil, and Uruguay, are now approaching the levels of incidence seen in the developed world.

A team of researchers from Brazil, Germany, and the United Kingdom recently mapped the use of pesticides across Brazil between 2000 and 2012. They then compared this to the number of deaths from colon cancer during the same period. They observed an overall increase of colon cancer, which was correlated with the amount of pesticides sold and used in the country. The study was published in November in the journal Chemosphere.

Analysing data published by the Brazilian Institute of Environment and Renewable Natural Resources, the researchers found that in 2000, just over 162 million tons of pesticides was sold in Brazil. By 2012, sales had jumped to roughly 476 million tons.

Over the same period, data gathered by the Brazilian ministry of health indicates that the number of deaths caused by colon cancer had gone up from 946,686 to more than a million, despite progress in cancer detection and treatment.

The researchers behind the study said that pesticides applied to Brazilian crops were contaminating food and water consumed by both people and livestock. “Several research groups have reported high pesticide levels in breast milk in Brazil over the last years,” says Vinicius Kannen, a pathologist at the University of São Paulo, and one of the study’s authors. “Pesticide residues in bovine milk have also been reported to exceed safety standards in some Brazilian regions.”

Kannen pointed to data from the Brazilian National Health Surveillance Agency as well. It found that 20 per cent of food samples it had analysed between 2013 and 2015 qualified as unsafe for human intake due to high pesticide levels.

A few epidemiological studies have suggested that pesticides increase the risk of colon cancer in humans and rodents. Despite that, no previous study has yet found a correlation between the increase in pesticide use and colon cancer mortality.

“The results show a strong link between pesticides and colon cancer mortality and as such cannot be ignored,” says co-author Francis Martin, based at the University of Central Lancashire’s School of Pharmacy and Biomedical Sciences in Preston, UK. “It is now critical to determine whether an exposure to pesticides has the potential to turn normal cells into cancer cells by acting as endocrine disruptors or by damaging DNA.”

According to researchers at the University of São Paulo, the pesticide market is worth around USD ten billion per year in Brazil, which is 20 per cent of the global market. This is partly due to lax legislation around pesticides. Many of the chemicals used in Brazil are badly monitored, and some are so toxic that they have been banned in Europe.

The rise in pesticide use in Brazil has been especially steep in the past few years. In 2017, Brazilian farmers used 540,000 tons of active agrochemicals ingredients, 50 per cent more than in 2010, according to the Brazilian Institute of Environment and Renewable Natural Resources.

The research was published in the wake of a controversial bill regulating pesticides in Brazil. The bill, dubbed the “poison package” by its opponents and approved by Brazil’s chamber of deputies in June, aims to speed up the approval and review process for pesticides on the Brazilian market. That presently takes between five and eight years.