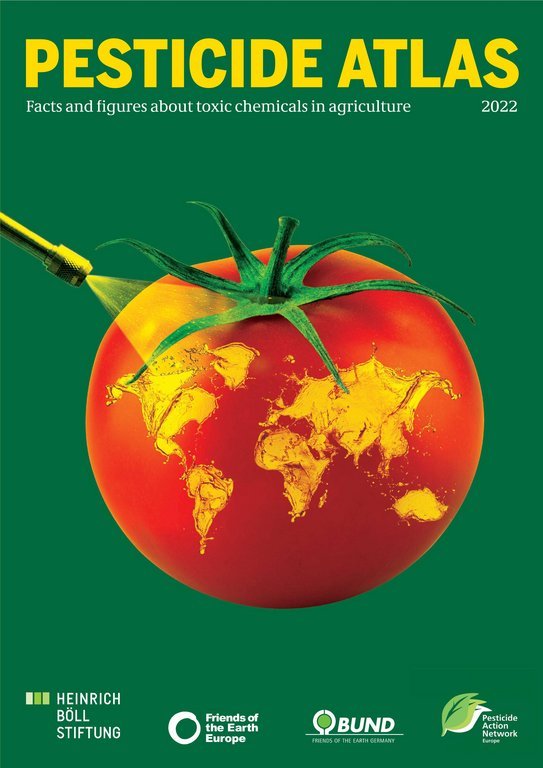 Parts of global crop production are lost to pests and plant pathogens each year. Pesticides have been designed to prevent these yield losses – but they also give rise to new problems. Published in October, the ‘Pesticide Atlas 2022 – Facts and figures about toxic chemicals in agriculture’ seeks to provide data and facts concerning the topic of pesticides.

In beer and in honey, on fruit and on vegetables, on playgrounds’ grass, in urine and even in the air – traces of pesticides used in agriculture can be found everywhere. That pesticides deteriorate human health, biodiversity, water and soil is not a new insight by any means. But today, greater amounts of pesticides are being used world-wide than ever before despite stricter approval regulations – and voluntary as well as binding agreements on the handling of pesticides. The cultivation of genetically modified plants like soy, engineered by the same corporations that are producing pesticides, has contributed to the increased use of herbicides, especially in biodiversity-rich countries.

The publication aims to draw attention to the risks and dangers ensuing from pesticides. A wide range of topics are address, including health aspects, biodiversity as well as political and economic issues. For example, the report demonstrates that the European Union is one of the largest markets world-wide for pesticides. However, political measures to reduce their use have not been very successful so far. Furthermore, the report warns that the world-wide pesticides market is even continuing to grow. It is shared by just a handful of corporations, which are increasingly investing in the countries of the Global South, in which regulations on pesticides are not so tough. This bears considerable threats.

The authors of the report therefore demand that the agricultural systems world-wide have to adapt in order to reduce growing pressure on indispensable insect and plant populations. The challenges of our times have to be mastered using fewer pesticides and fertilisers. According to the report, what is crucial is to work together with nature – and not against it. Now is the time to set the course in this respect, it says. Agricultural ecology, integrated pest management (IPM) and more biopesticide research can help in this context. This is why, with the Atlas, the authors seek to contribute data and facts for a lively debate and in support of necessary change.