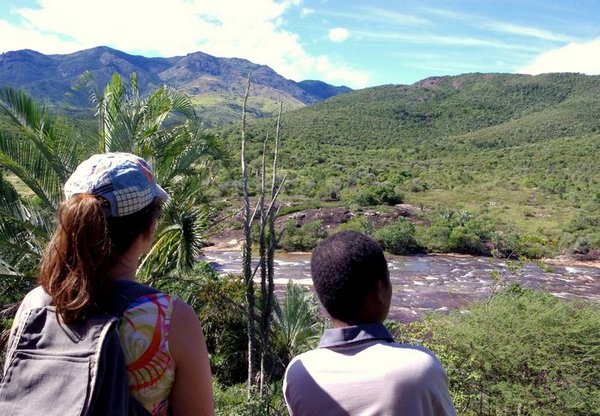 On a mission in southern Madagascar, to assess the socioeconomic impacts of a PES scheme: a protected area funded with carbon credits.
Photo: © D. Ezzine de Blas, CIRAD

Payments for environmental services have proved difficult to put into practice. To understand the reasons for this relative lack of efficacy, researchers at the French research centre CIRAD analysed 70 programmes world-wide. A significant disparity was observed between theory and practice in terms of these incentive instruments.

Shortcuts and simplifications in implementing payments for ecosystem services (PES) have made these incentive instruments less effective than they could be. This was demonstrated by an analytical study of 70 PES programmes world-wide, published in Nature Sustainability on the 12th March 2018. "We did not set out to be exhaustive, but we consider the sample studied to be wholly representative of the PES that have existed over the past twenty years or so,” Driss Ezzine de Blas, the CIRAD socio-economist, and co-author of the study, explains.

Ezzine-de-Blas points out that "despite the diversity of PES programmes analysed, there has been a tendency to simplify on every continent". PES form a range of incentive financial instruments consisting in rewarding landowners for preserving ecosystems that provide services (water quality maintenance, carbon capture, erosion control, conservation of threatened species, etc.). In recent years, the efficacy of such programmes has been questioned, although the reasons for their failure were not known.

Controls and sanctions are difficult to implement

A methodological study of the design and subsequent implementation of PES showed that some of the basic principles of these instruments were not being applied. PES are based on conditionality. In other words, payments are made if a plot is kept under forest, for instance. This principle means monitoring to check that the agreement is being respected and sanctioned if it is not.

The analysis revealed that in practice, monitoring was seldom being implemented, and sanctions even less. For the authors, these implementation issues were not so much linked to the complexity of biophysical monitoring or insurmountable transaction costs, but were often a socially and politically sensitive issue. “This is a recurrent problem with the environmental economy: without sanctions, we know PES are less effective. But what about social vulnerability if we are talking about punishing already very disadvantaged people? What would this do for the popularity of a government or NGO?" Driss Ezzine de Blas wonders.

Spatial targeting and payment differentiation have been overlooked

Two other basic principles often fail to survive in the practical implementation of PES. Spatial targeting is only done in two thirds of the cases. Giving priority to a specific zone in the area eligible for the programme targeting (depending on ecosystem importance, the risk of deforestation or the poverty level, etc.) plays a key role in the efficacy of PES and serves to allow for differences in the vulnerability of people targeted by PES.

A second principle, payment differentiation, serves to adjust the effort required of participants — known in economics as the opportunity cost — so as to maximise their contribution. The effort needed to participate in such programmes is not the same for everyone, and some people may even be gambling their entire agricultural output. While payment differentiation is observed in 59 per cent of cases, it unfortunately generally concerns differences in the ecosystem services rendered rather than the efforts made by the target populations.