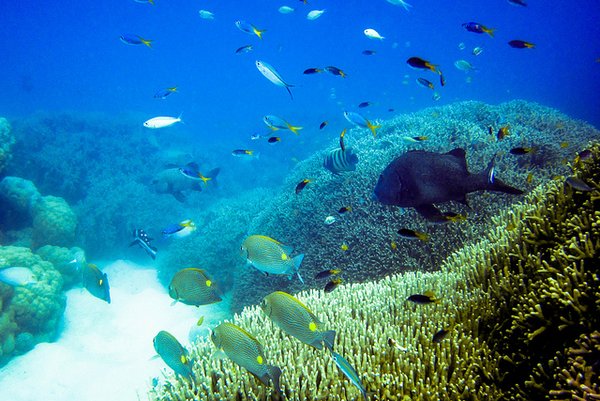 Global warming could cause pacific islands to lose up to 80 per cent of fisheries.
Photo: flickr/Ryan McMinds

Pacific island countries could lose up to 80 per cent of fisheries, a recent study has found. Countries in the Pacific heavily depend on fish as an important source of food and income.

Many Pacific Island countries and territories will lose 50 to 80 per cent of marine species by the end of the 21st century if climate change and global warming continue unchecked, reports a new study.

“Potential fisheries catches will decrease by more than 50 per cent in many regions in the South Pacific,” says William Cheung, associate professor, University of British Columbia, and co-author of the study published in the November issue of Marine Policy.

A decrease can happen in both scenarios — business-as-usual (increase in temperature above three degrees Celsius by 2100) and strong mitigation (below 1.7 degrees Celsius by 2100) — but to a lesser extent in a low emissions scenario. According to the study, fisheries catches are expected to fall by more than 50 per cent by the year 2050 for the Cook Islands, Micronesia, Niue and Tuvalu.

Such losses will be dramatic as most countries in the Pacific are dependent on fisheries for food and livelihoods. Fish contribute up to 50 per cent of the animal protein diet on some islands. National economies will also be strongly affected. Yellow fin tuna and skipjack tuna may shift their distribution eastward and poleward throughout the 21st century, “with the potential disappearance of these species altogether from the western warm pool region,” the authors write.

Projections published by Western and Central Pacific Fisheries Commission in August 2017suggested a more moderate decline in fish resources in the west tropical Pacific, estimating a 14 per cent drop on average by 2050 and a 50 per cent decrease by the end of the century.

The impacts of sea warming are well-documented. It disturbs the reproduction, growth, and metabolism of marine species and transforms the food chain. At the base of the ocean food web, phyto-plankton are projected to decline due to higher surface temperatures near the equator. Decreasing oxygen concentrations will limit the ocean depth that fish can occupy, leading to habitat compression.

Anthropogenic carbon dioxide gas released into the atmosphere is also making sea water more
acidic, affecting the calcification of coral and invertebrates, and so decreasing the habitat and food of reef-associated fish.

Because this rate of change is unprecedented, scientists expect that fish will be unable to adapt. Marine life in the tropical western Pacific is even more vulnerable to these changes because of a seasonally stable environment. As water temperatures climb up to 30 degrees Celsius, the western Pacific Ocean is susceptible to fish migration.