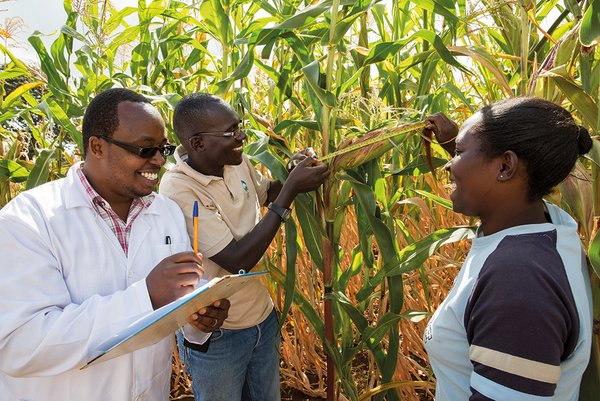 Members of the project team measuring the length of the maize cobs in the SysCom field trial at Chuka, Kenya.
Photo: FiBL

In a long-term project in Kenya, the Swiss-based Research Institute of Organic Agriculture has examined the potential of organic and conventional agriculture regarding soil fertility, the occurrence of pests and diseases, and profitability. Initial results make a strong case to implement policy measures necessary for supporting the adoption of organic management practices on a large scale.

About 80 per cent of Africa’s population depend on agriculture as their primary source of livelihood, and it provides employment to around 70 per cent of the continent’s poorest people. The main form of farming in sub-Saharan Africa (SSA) is simultaneous multispecies mixed farming. In East and Southern Africa, maize-based mixed farming is the most important food production system, but productivity is very low and is considered one of the reasons for the persistence of rural poverty in the region. The low crop productivity has been attributed to a number of factors that include low soil fertility and long-term soil degradation caused by deforestation, overgrazing, continuous and intensified cropping with inadequate replenishing of soil nutrients and a low take up of sustainable resource management strategies. There is a clear need to reverse the decline in soil fertility and the degradation of the natural resources.

The positive impacts of organic agriculture on soil fertility and biodiversity, but also on productivity and profitability, plant health, resource use efficiency and climate change mitigation, have already been established in temperate environments. However, these facts are yet to be proven under tropical conditions. This is what the Farming Systems Comparison (SysCom) was launched for. It aims to fill the present knowledge gap by evaluating the performance of different farming systems over a long term. Following six years of trial crops, the first results are now on hand.

In the context of the study, in 2007, permanent field sites were established at two locations in the Central Highlands of Kenya with a sub-humid environment – Thika and Chuka. These field trials feature a 6-season-3-year crop rotation with maize and different vegetables and are set up in a way that both organic and conventional farming systems are comparable at high and low input levels, representing commercial scale irrigated and subsistence scale rain-fed farming respectively. In principle, the level of inputs in the low-input treatments reflects the availability of farm-owned resources as a determining factor, whereas in the case of the high-input treatments the crop requirements and profitability are the main driving factors, necessitating the use of market-purchased inputs (e.g. biopesticides for organic) and irrigation water. Thereby, both the field experiments are designed to compare four treatments: Conventional High Input (Conv-High), Organic High Input (Org-High), Conventional Low Input (Conv-Low) and Organic Low Input (Org-Low).

Project achievements and findings till date

The first six-years results of the long-term study show the potential of organic farming to improve the soil fertility and economic profitability compared to the conventional approach (see diagrams below). 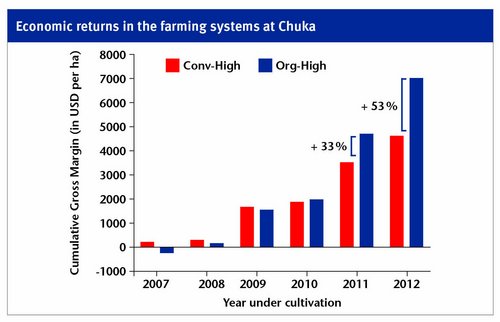 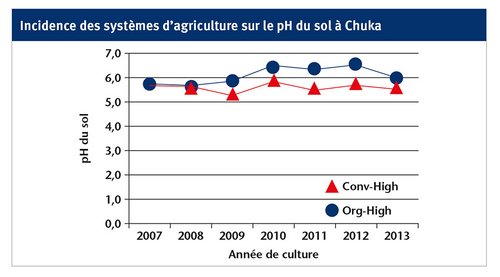 Here are the examined factors in detail:

These first results from the long-term study in Kenya show the potential of organic agriculture to improve soil fertility and farmer incomes in sub-Saharan Africa. At the same time, the yields of organic fields level off conventional fields. This shows that organic systems start to deliver substantial economic advantage over conventional systems as soon as the initial conversion phase is over.
Now it is important to observe the performance in the mid and long term. This is why it is planned to continue the SysCom programme with further studies focusing on these aspects over the next few years.