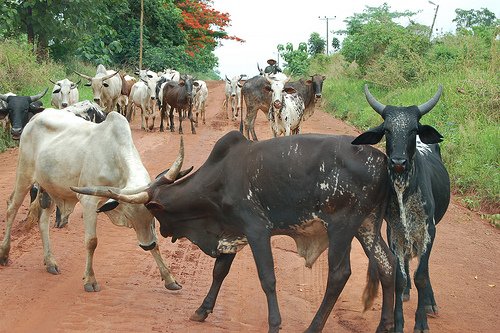 106 cattle from various randomly chosen farms have been checked for the virus.
Photo: ©Modernghana

An international team of researchers in Ghana have discovered new strains of cattle virus that are distant relatives of the hepatitis C virus, which is dangerous to humans. The German Center for Infection Research (DZIF) plays a crucial role in the project.

Researchers from the German Universities of Bonn, Hamburg und Hanover as well as from Moscow (Russia) and Kumasi (Ghana) have discovered novel strains of cattle virus. Information published by the University of Bonn suggests that the pathogens are distant relatives of the hepatitis C virus, which can trigger a dangerous infection of the liver in humans. The scientists report that the viruses were identified in cattle from Ghana. It is not yet certain whether they can also infect humans. The discovery of the new hepacivirus was above all enabled through close co-operation between the three German teams involved that have been active at the DZIF since 2012.

The University of Bonn states that the newly described viruses belong to the group of the hepaciviruses. They probably multiply in the livers of cattle. The infection appears to occur very frequently. “We examined 106 cattle from various randomly chosen farms in Ghana,” explains Jan Felix Drexler, who was recently appointed Professor of Virology by the University of Bonn and is a member of the DZIF. “We were able to identify the viruses in nine animals.”

Drexler says that the pathogens are related to the hepatitis C virus. World-wide, more than 180 million people have contracted hepatitis C. An infection is usually caused by blood contact with an already infected person, and it may result in a chronic inflammation of the liver, possible consequences of which are liver failure or cancer of the liver.

It is not yet clear whether the newly discovered viruses can also infect humans. “That is an important aspect which we now intend to examine,” Drexler stresses. “After all, cattle are the most common livestock world-wide.” Moreover, he explains, contact with cattle blood may also occur during slaughter and in preparing the meat. However, the cattle virus is definitely not the direct precursor of the human virus. “No patient suffering from a hepatitis C infection can have caught the disease from cattle,” Drexler emphasises.

So far, it is uncertain what symptoms the cattle viruses cause in the animals. However, there are indications that they also multiply there in the liver. Whether this impairs the health of the animals is to be examined in co-operation with the groups involved in Germany and Ghana. The evolutionary history of the cattle viruses yields insights into the evolution of the hepaciviruses. “Today, we know that the Ghanaian viruses belong to two different sub-strains,” Drexler explains. “The sub-strains probably developed hundreds of years ago.

Cattle from other parts of Africa are now to be included in examinations for a more detailed analysis. For it cannot be ruled out that they are also infected, the researchers in the project say. Their study appeared in the Journal of Virology in March.