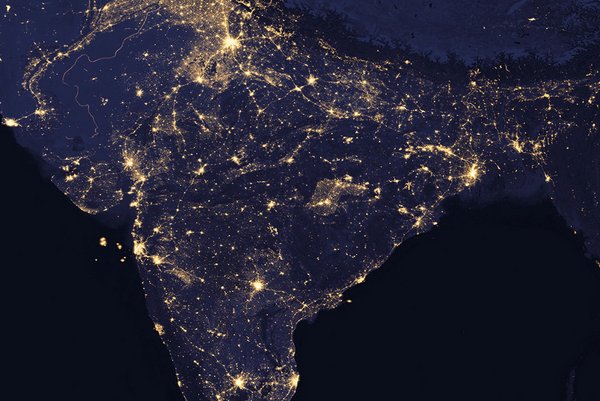 A satellite shot of India at night.
Photo: © Courtesy of NASA Earth Observatory

A new software has been developed to identify villages suitable for aid projects. Researchers focused on two initial projects in India and Africa.

A software that can identify houses and even types of houses from readily-available satellite imagery has been developed by a team of graduate students at the Massachusetts Institute of Technology (MIT) and a social-service group of data scientists. This was reported by MIT in March 2015; the findings have been published in the journal Big Data.

The new software is to make it easier to identify villages suitable for aid projects – a process that has been very elaborate up to now. Often, even the sizes and locations of villages are poorly mapped, so time-consuming field studies are needed to locate suitable sites.

The researchers focused on two initial projects in India and Africa, though they stress that their software solutions could be applied to many other kinds of projects and other regions.

The first project was to select villages in sub-Saharan Africa for a programme of unrestricted cash grants to help people in low-income rural areas improve their standard of living by enabling them to buy equipment, livestock, or whatever they felt best met their needs. The system adopted by the grant-giving agency was to target the poorest villages, selected by counting the metal roofs — a task that had been carried out by fieldworkers on the ground.

The second project was selecting villages in rural parts of India for installation of microgrids to supply electricity from solar panels and battery-storage systems, and then figuring out the optimum sites for those panels and the most efficient network configuration for distributing that power.

In both cases, the key first element is automating the task of figuring out where the buildings are within a satellite image. For this research, the team used two kinds of satellite imagery: Google Earth, which has three colour “channels” in their images, corresponding to red, green, and blue, and commercial satellite imagery that also includes a near-infrared channel which provides additional information for detecting vegetation and other features.

The team says that the general algorithms they have developed could have many other uses beyond the two specific projects they initially tested. For example, there is little data on demographic changes in India, in terms of which areas have gained or lost population and by how much. This tool could be used for analysing those population shifts by automated tracking of where houses are and how that changes over time.