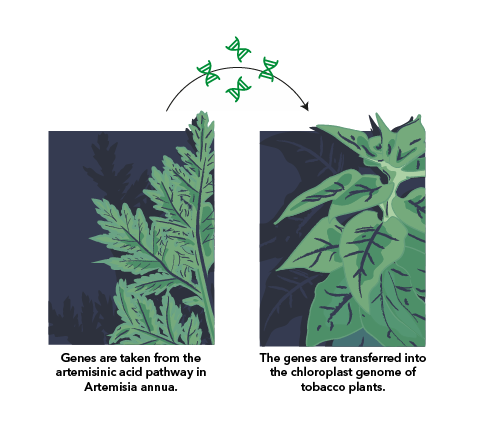 A new and inexpensive technique for mass-producing the main ingredient in the most effective treatment for malaria, artemisinin, could help meet global demands for the drug, according to a study to be published in the journal eLife.

Artemisinin is produced in low yields by a herb called Artemisia annua (A. annua), otherwise known as sweet wormwood. Researchers from the Max Planck Institute of Molecular Plant Physiology have now discovered a new way to produce artemisinic acid, the molecule from which artemisinin is derived, in high yields. Their method involves transferring its metabolic pathway – the series of biochemical steps involved in its production – from A. annua into tobacco, a high-biomass crop.

“For the foreseeable future, artemisinin will be the most powerful weapon in the battle against malaria but, due to its extraction from low-yielding plants, it is currently too expensive to be widely accessible to patients in poorer countries,” says contributing author Ralph Bock, Director of the Department for Organelle Biology, Biotechnology and Molecular Ecophysiology. “Producing artemisinic acid in a crop such as tobacco, which yields large amounts of leafy biomass, could provide a sustainable and inexpensive source of the drug“.

The team have called this approach to producing more artemisinic acid COSTREL (“combinatorial supertransformation of transplastomic recipient lines”). The first step in their process was to transfer the genes of the artemisinic acid pathway’s core set of enzymes into the chloroplast genome of tobacco plants, generating what are known as transplastomic plants.
The team then used their best transplastomic tobacco plant line to introduce an additional set of genes into its nuclear genome, generating the COSTREL lines. These remaining genes encode factors that increase the synthesis, or generation, of the acid in ways that are still largely unknown.

“While the artemisinic acid pathway in A. annua is confined to the glandular hairs on the plant, leading to low yields of artemisinin, our COSTREL tobacco lines produce it in their chloroplasts and therefore the whole leaf,” says lead author and postdoctoral researcher Paulina Fuentes.
“We generated over 600 engineered tobacco plant lines that harbour different combinations of these additional genes, and analysed them in terms of the amounts of artemisinic compounds they acquired,” Fuentes explains. “We could then identify those that generated unprecedented levels of 120 milligrams per kilogramme of artemisinic acid in their leaves, which can be readily converted into artemisinin through simple chemical reactions.”
The scientists note that, although further increases in these production levels would be needed if global demand for artemisinin is to be met, the study might lay the foundation for much cheaper production of this life-saving therapy in a high-biomass crop, in contrast to a single medicinal plant.