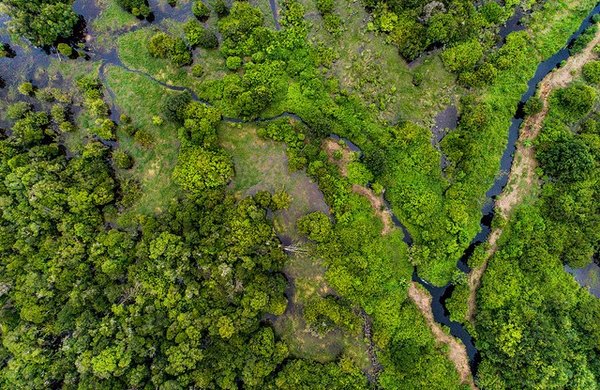 Indonesia is still the holder of the deepest peat areas. Here on the island of Kalimantan Tengah, Indonesia.
Photo: Nanang Sujana/CIFOR

Tropical countries are home to three times as much peat as previously thought, exposing new possibilities and challenges for tackling climate change – according to new research at the Center for International Forestry Research (CIFOR).

Recent findings from the Center for International Forestry Research (CIFOR) and six other research institutions contest the long-held view that Asia is the continent with the most tropical peatland, instead revealing it to be South America. The study was presented at the Global Landscapes Forum, held in May in Jakarta, Indonesia.

The scientists’ mapping of 146 countries in the tropics and sub-tropics found 1.7 million square kilometres (km2) of peatlands and 4.7 million km2 of wetlands.

A combination of extended deep deposits in countries like Peru, Ecuador and Argentina, and vast but shallow peatlands in the Brazilian Amazon are largely responsible for South America’s position as the map’s leading contributor to tropical peat stocks (44 per cent share of area and volume) the study reveals. More than a third – 38 per cent – of tropical peat area and volume is found in Asia, with Indonesia still the holder of the deepest peat areas.

The Congo Basin in Africa now has the most extended peat deposits so far researched in the tropics. Africa as a whole has more peat than earlier believed, but climatic conditions mean it has the least of all continents.

“These findings are part of a living document that anyone can access, give their feedback on, and will be updated as new data becomes available,” says Daniel Murdiyarso, Principal Scientist at CIFOR and co-author of the paper. “The map serves as a significant starting point for a range of future work on peatlands and wetlands.”

Scientists developed a unique technique – called an ‘expert system model’ – to produce a map with a high level of detail of the location, extent and depth of peat. It provides comparable, transparent and consistent data across countries and continents.

The model works by combining a variety of data sources and methods, including analysing the turnover of water and measuring changes in soil moisture recorded in satellite imagery and land forms – like channels, valleys and slopes – that support water inundation.

The study’s authors also posit that peatlands in South America and Africa have previously been under-reported, because access is more difficult on the ground and they have not faced the same level of human destruction as in Southeast Asia, keeping them out of the international limelight.

The existence of more tropical peat deposits raises many opportunities and challenges for both people and the planet.

As well as acting as important sites of biodiversity, peatlands are crucial for regulating and mitigating climate change. If poorly managed – i.e. dried and set alight to clear space for agricultural use – they can release huge amounts of carbon into the atmosphere. The associated toxic smoke can also have catastrophic health consequences.

The map is designed to help countries limit these threats.

“In accordance with the Paris Agreement, countries party to the UN climate treaty are obliged to submit their Nationally Determined Contributions (NDC), which include their targets for reducing greenhouse gas emissions,” says Murdiyarso and adds: “Countries housing tropical peatlands may use the map to locate where land-based development could cause problems and compare how policy intervention could improve the business-as-usual approach in the identified location.”

Peatlands highlighted by the map in South America and Africa that are yet relatively undisturbed, are already facing the threat of increased droughts, fires and development, such as anticipated logging concessions and road-building.

The scientists stress that further work is needed on the ground as part of CIFOR’s ongoing work on peatlands, to test the model’s findings, gather more information on mountainous regions and check if the peatlands identified are being disturbed.

For more information on this topic visit:

The CGIAR Research Program on Forests, Trees and Agroforestry

The living document on global peatlands