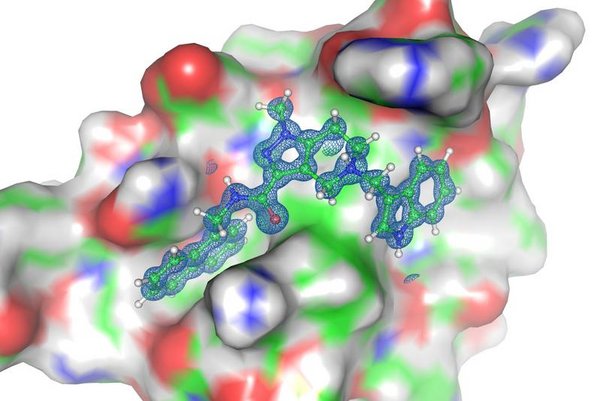 Structure of the interaction point between PEX14 and PEX5 including the inserted active substance in the foreground.
Photo: © Dr Grzegorz Popowicz, Helmholtz Zentrum München

A new technique has enabled scientists in Germany to develop an active substance which can kill off the trypanosomiasis pathogens.

A newly-developed active substance targets and kills the pathogens of sleeping sickness and Chagas disease, according to scientists at the Helmholtz Zentrum München in Germany, together with colleagues at the Technical University of Munich and Ruhr Universität Bochum, writing in the journal ‘Science’. The trick: researchers used the latest techniques of structural biology to identify the parasite’s Achilles heel and then develop a precisely-configured active substance.

Trypanosoma is derived from the Greek for “borer” and “body”. They are single-celled parasites which are responsible for various diseases, primarily in Latin America and Africa. The best-known example is the sleeping sickness caused by Trypanosoma, transmitted by the tsetse fly. In the final stage, patients fall into a semi-conscious state which gives the disease its name.

“Previously there were few medications for trypanosoma, these had a lot of side effects and we’re already seeing resistance developing,” explains Professor Michael Sattler, Director of the Institute for Structural Biology at Helmholtz Zentrum München and professor of Biomolecular NMR Spectroscopy at TU Munich.
Together with his colleague Dr Grzegorz and scientists at Ruhr Universität Bochum, the research team looked for new ways to disarm the pathogen. “We concentrated primarily on the so-called PEX proteins, which have been under discussion for some time as possible target structures for therapeutic approaches,” Sattler comments.

The PEX proteins play a decisive role in the function of the so-called glycosomes. These are small organelles which the parasite needs for its glycometabolism. “The idea was to block the interaction of the two important proteins PEX14 and PEX5 as a means of disrupting trypanosomal metabolism so massively that it was unable to survive,” explains Grzegorz Popowicz. At the Bavarian NMR Centre, which is jointly operated by Helmholtz Zentrum and Technical University Munich, the researchers accordingly began by using NMR (nuclear magnetic resonance) spectroscopy to examine the structure of the two target proteins.
In the next step, the teams from Munich and Bochum then used the new knowledge about the physical structure to develop an active substance which bonds perfectly to PEX14, disrupting the interaction with PEX5 and killing the parasites.

Technique relevant for other parasites?

In future, the researchers intend to develop the molecules further so that they can be tested in clinical trials and possibly used to manufacture drugs. They are also investigating whether the method is suitable for use with other monocellular parasites which might depend on similar proteins. “One possibility could be combating Leishmania,” Popowicz explains. Research will continue on these lines.