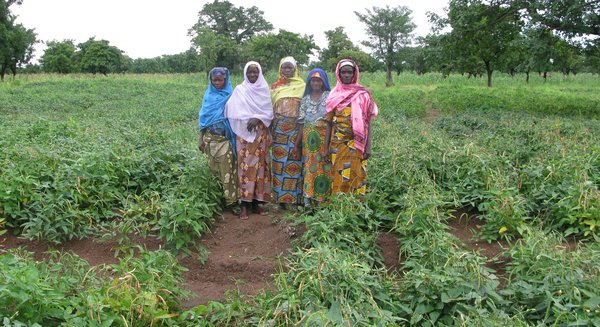 N2Africa, a research project by Wageningen University - that encourages African farmers to plant beans as food and fertiliser could help counteract the impact of limited fertiliser take-up across the continent. The project won the World Bank “Harvesting Nutrition Contest”.

Global use of nitrogen fertiliser is forecast to grow by 1.4 per cent each year to above 119 million tonnes in 2018, according to a recent report by the United Nations Food and Agriculture Organization (FAO). But less than five per cent of that growth will come from Sub-Saharan Africa, largely because fertiliser is often too expensive for subsistence farmers, the report says.

According to an article in SciDevNet, the lack of nitrogen in Africa’s soils is the “most limiting factor” holding back agriculture on the continent.  As an alternative to fertiliser, Africa’s meagre crop yields are getting a boost from an edible and more environmentally friendly source instead: beans. When growing legumes such as beans and peas, nitrogen fertiliser is not required because the plants grab all the nitrogen they need from the air with the help of bacteria living in their roots. Some of the captured nitrogen also enters the soil through fallen leaves and from decomposing roots. This helps to fertilise crops that are later farmed on the land.

Wageningen University, in the Netherlands, is leading a project called N2Africa that is teaching subsistence farmers in 13 African countries to grow legumes.  Scientists at Wageningen University characterise the project as a large-scale, science-based “research-in-development” project, focusing on putting nitrogen fixation to work for smallholder farmers growing legume crops in Africa. Their vision is to build sustainable, long-term partnerships to enable African smallholder farmers to benefit from symbiotic N2-fixation by grain legumes through effective production technologies, including inoculants and fertilisers.
The project further aims to use legumes to boost harvests of staple crops, such as maize, that have stagnated at around one tonne per hectare since the 1960s. The legumes also provide poor farmers with additional food and income, say the scientists. N2Africa began in 2009 and now involves more than 250,000 farmers. Data published last May shows that average legume harvests have increased by 12 per cent to nearly 400 kilograms per farm. On average, the legumes added 28 kilograms of nitrogen to the soil per farm, a rise of 169 per cent from previous levels.

In February this year N2Africa was chosen by the World Bank as one out of three winners of the Harvesting Nutrition Contest. N2Africa won the award as an outstanding nutrition-sensitive scaling agriculture project. In 2012, The World Bank Group launched the SecureNutrition Platform to bridge knowledge gaps between agriculture, food security and nutrition. Together with Global Alliance for Improved Nutrition (GAIN) and Save the Children UK, the SecureNutrition Knowledge Platform’s 2013 Harvesting Nutrition contest was initiated to showcase projects that link agriculture, food security and nutrition and their challenges.