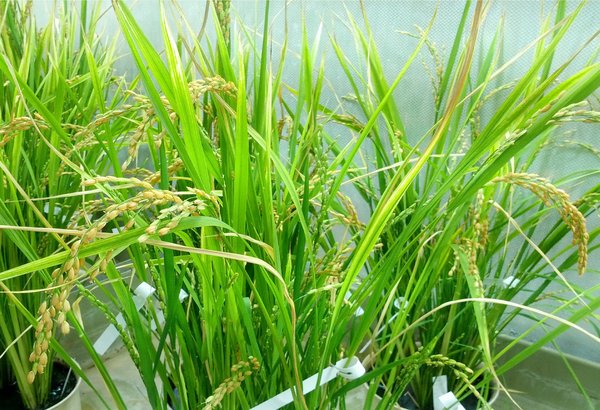 The new rice line in the greenhouse can supply rice consumers with three essential micronutrients in the future. © ETH Zurich / courtesy of Navreet Bhullar

Researchers at ETH Zurich in Switzerland have developed a new rice variety that has not only increased levels of the micronutrients iron and zinc in the grains, but also produces beta-carotene as a precursor of vitamin A. This could help to reduce micronutrient malnutrition, which is widespread in developing countries.

Nearly every second person on this globe primarily eats rice to meet the daily calorie needs. A meal of rice stops the hunger, but contains only very few or even none of the essential micronutrients. As a consequence, large segments of the human population are malnourished, especially in Asia and Africa. They do not obtain enough iron, zinc or vitamin A to stay healthy.

“Golden Rice” against vitamin A deficiency

To combat malnutrition, researchers at the Eidgenössische Technische Hochschule (ETH), Zurich/Switzerland, in co-operation with research centres in Asia, had already developed a new rice variety many years back that became known as «Golden Rice» in 2000. This was one of the first genetically modified rice varieties in which the researchers could produce beta-carotene, the precursor of vitamin A, in the endosperm of the rice grain. Golden Rice was further improved and is now being used in breeding programmes in several countries, primarily in Southeast-Asia.

To address other micronutrient deficiencies, researchers at the Laboratory of Plant Biotechnology, headed by Professor Wilhelm Gruissem, at ETH Zurich as well as in other countries developed new rice varieties with increased iron levels.

All of the new transgenic rice varieties have one thing in common, however: they can only provide one particular micronutrient. Until recently, combining several micronutrients into one rice plant was a dream that could not be realised.

Now, however, a group led by Navreet Bhullar, senior scientist in the Laboratory of Plant Biotechnology at ETH Zurich, has announced that multi-nutrient rice has been bred. The results were recently published in the journal Scientific Reports.

Bhullar and her PhD student Simrat Pal Singh succeeded in genetically modifying rice plants in such a way that in addition to sufficient levels of iron and zinc, they also produce significant levels of beta-carotene in the endosperm of the grain. «Our results demonstrate that it is possible to combine several essential micronutrients - iron, zinc and beta-carotene - in a single rice plant for healthy nutrition,» explains Bhullar.

Scientifically, the success was the engineering of a gene cassette containing four genes for micronutrient improvement that could be inserted into the rice genome as a single genetic locus. This has the advantage that iron, zinc and beta-carotene levels can be simultaneously increased by genetic crosses in rice varieties of various countries. Otherwise it would be necessary to cross rice lines with the individual micronutrients to reach the improved micronutrient content in rice grains.

Bhullar and her PhD students worked several years to establish this proof-of concept. Although the grains of the multi-nutrient rice lines have more beta-carotene than the original japonica rice variety, depending on the lines, the beta-carotene content can be ten times lower than in Golden Rice 2, the improved variant of Golden Rice. «But if one were to substitute 70 per cent of the currently consumed white rice with the multi-nutrient variety, this could markedly improve vitamin A supplementation already in addition to sufficient iron and zinc in the diet,» emphasises the researcher.

The new multi-nutrient rice lines are still in their testing phase. So far, the plants have been grown in the greenhouse and analysed for their micronutrient content. «We will improve the lines further,» says Bhullar. It is planned to test the plants in confined field trials to determine if the micronutrient traits and also agronomic properties are as robust in the field as they are in the greenhouse.

Bhullar hopes that the new rice lines will be tested in the field next year. But she does not yet know when they are ready for production in farmer’s fields. «It will probably be five years before the multi-nutrient rice can be used to reduce hidden hunger,» she says.