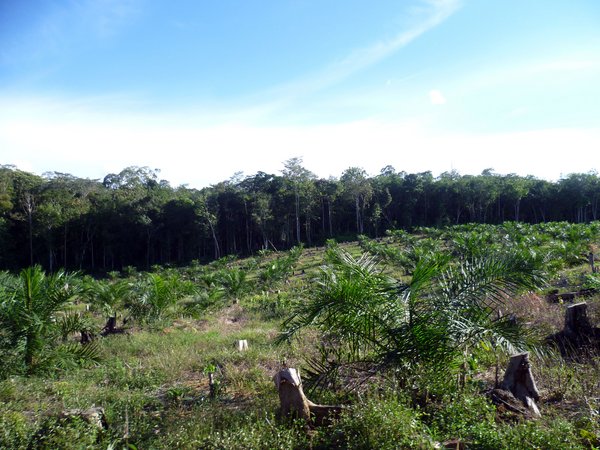 Deforestation linked to palm oil production is making Indonesia warmer. An international team of experts on bioclimatology report effects on temperatures after changes in land use that are making the country more vulnerable to wildfires.

In the past decades, large areas of forest in Sumatra, Indonesia have been replaced by cash crops like oil palm plantations and rubber. Now a team of scientists led by the University of Göttingen, Germany, have found out that these changes in land use increase temperatures in the region. The added warming could affect plants and animals and make parts of the country more vulnerable to wildfires. The results are reported in the European Geosciences Union journal Biogeosciences.

Palm oil is the most widely used vegetable oil in the world. Indonesia, the world’s largest producer of palm oil, has seen large swathes of rainforest cleared away and replaced by oil palm plantations. The island of Sumatra has had the highest loss of native rainforest in all of Indonesia. In the framework of the University of Göttingen’s Collaborative Research Centre “Ecological and Socioeconomic Functions of Tropical Lowland Rainforest Transformation Systems (Sumatra, Indonesia)”, the research team, led by Clifton Sabajo and Alexander Knohl, have established that the expansion of oil palm and other cash crops in Sumatra has made the region warmer. “Not only does the land use change impact biodiversity and stored carbon, it also has a surface warming effect, adding to climate change,” says Knohl, a professor in bioclimatology.

The team studied differences in surface temperature for various types of land cover, such as forests, clear-cut land, and cash crops, in the Jambi province of Sumatra. They used satellite data collected between 2000 and 2015 as well as data collected on the ground. They found that clear-cut land was up to ten degrees Celsius warmer than forests. “Clear-cut land is the phase after the forest has been cleared away and before the start of commercial plantations or farming,” says Sabajo, a PhD student and the lead author of the study.

To the scientists, the strong warming effect in Jambi province may serve as an indication of future changes in land-surface temperature for other regions of Indonesia that will undergo land transformations towards oil palm plantations. “Land surface temperature is an important part of the microclimate, which shapes habitat conditions for plants and animals,” says Knohl. “The observed warming may affect ecosystems in many ways. Current land-use developments in Indonesia need to carefully evaluate and consider all aspects of environmental and socio-economic consequences.”