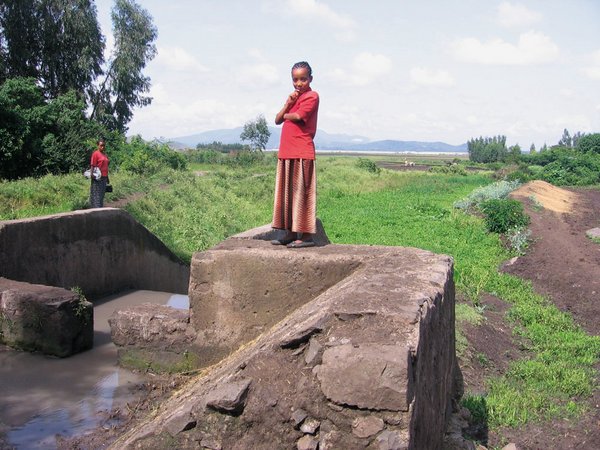 Before the investors arrived, the water distribution system was organised by self-devised rules with almost no governmental involvement.
Photo: A. Bues

The phenomenon of foreign actors securing farmland in other countries has reached an unprecedented pace and dimension. Water plays a central role in these land deals. However, studies analysing these procedures and impacts of land deals on the existing water management system of a country are still rare. This article presents the outcomes and lessons learnt from a study in Ethiopia. The author was presented the Hans H. Ruthenberg Advancement Award for Graduates for her Master’s thesis in 2011.

Foreign direct investment has become vital in many developing countries, particularly in Africa. While media coverage has dramatically increased, scientific research has just begun and mainly focuses on the underlying political mechanisms as well as on the economic, environmental and social impacts of these investments. Also, very little research has been done on the role of water management in areas where foreign investors and local farmers share water resources.

This article presents the outcomes and lessons learnt from a study that was carried out in Ethiopia in 2010: Horticultural farms were allocated land in an area that was formerly managed by small-scale farmers, and started to use the same water sources. The study aimed at assessing how the institutional set-up of a water management system changes when foreign actors enter the arena and how this change and the arising conflict can be explained. The study’s theoretical background is Institutional Economics employing Common-pool Resource Theory and the Distributive Bargaining Theory of Institutional Change (Knight 1992, 1995). The study primarily draws on data collected during two months of field work in 2010. Seventy farmers from two communities, five investment managers and ten governmental representatives and researchers were interviewed.

The irrigation scheme under study is situated in central Ethiopia, in the administrative region of Oromia. The scheme was built in the 1980s with the initial objective to establish state-owned horticultural farms with a corresponding 1,600 hectares of irrigable land. Only 500 hectares was realised, and a state-owned farm was installed to produce vegetables and fruits. This farm was only operational for a few years, after which the land was partly given to smallholders, the rest remaining unused. Around 2005, the government allocated approximately 140 hectares to floricultural and horticultural investors from abroad. The land was taken from the former state farm and also from local farmers, who were granted compensation.

Since the arrival of the investment farmers in the area, the canal water has been shared among both groups – the investment farmers and the local producers. The water flows into the primary canal leading southwards to local farmers and nine floricultural and horticultural farms that are directly situated along the canal. Five out of the nine farms are owned entirely by foreign investors from the Netherlands (two), Israel (one), the Palestinian Territories (one), and China (one). Two of the farms are organised as joint ventures between Ethiopian and foreign investors (Russian/Ethiopian and Israeli/Ethiopian), and two farms are completely Ethiopian. The average farm size is 20 hectares. What is unusual about the irrigation scheme is that the water flow into the canals can be only controlled by using a special key. Thus the water guards, who have such keys have the power to change the water level in the canal system.

The flori/horticultural farms irrigate their greenhouses and open fields throughout the year, using groundwater and, to a lesser degree, water from the canal. In contrast, local farmers use irrigation water primarily during the dry season for the production of onions, tomatoes, potatos and chickpeas, using flood and furrow irrigation, and are dependent on canal water. The irrigation scheme considerably contributes to food security in the area, with farmers producing for subsistence and for the local smallholder market.

Before the investors arrived, the water distribution system was organised by self-devised rules with almost no governmental involvement. Decisions were taken in farmer user groups  on a democratic basis. In order to acquire the right to use canal water, a farmer needed to pay the land tax or rent land from another farmer, to become a member of a group and abide by its rules. Rules included “to use water by turn”, “attend meetings” and “use water properly”, e.g. not to flood the neighbour’s field. Most, but not all, water groups raised water user fees, which were collected by the committees of the groups. Most of the groups also had sanctions for non-compliance with the rules. However, these sanctions were rarely executed.

Arising water conflicts
Water scarcity increased when the nine investment farms became operational. This resulted in water conflicts at the water gates, where the investment farmers had sent their own water guards, while the local farmers were still using their own water guards to open and close the canals. To solve the conflict, one investor founded an association to manage and maintain the canal system. This new association was established without any governmental involvement and managed by a chairperson, his assistant and a farmers’ representative. A former governmental extension worker was appointed as the chairperson, and an employee of one of the investment farms as his assistant. The new association called for regular meetings, but, usually not many representatives from both sides would attend the meetings due to work commitments.

Very soon, the new association reorganised the previous water management system of the local farmers. Firstly, the farmers’ water user groups were re-structured into groups with lower membership. Secondly, water user fees were introduced to all remaining user groups that had not had them before, and the user groups’ committees were instructed to hand the money over to the new association. Previously, the collected money had remained with the user groups. Thirdly, sanctions for non-compliance to the still existing rules were introduced for all user groups and sanction fees were raised substantially. Fourthly, the new association set up a water turn-taking system between the investment farms and the local farmers, giving the days to use the canal to local farmers and the nights to the investment farms.

Four binding rules were thus enforced onto the local farmers: pay the water fee, attend the group meetings, respect the turns and use water properly. The latter three were considerably sanctioned in case of non-compliance. However, only two rules were established for the investment farms: pay the yearly water fee and respect the turns agreed between farmers and investment farms. None of these rules were sanctioned. The question rises as to why this unequal arrangement could be enforced, although local farmers were represented in the new association.

One answer could be that farmers did not feel equally represented in the meetings of the new association. The farmers’ representative often felt ruled over by the investment farms’ representatives. The reason for the farmers to agree to the new rules for the user groups was because the chairperson of the new association was known to them as a government representative. In rural Ethiopia, opposing the government can cause the denial of important government services, such as health care or agricultural support (Human Rights Watch 2010). Therefore, many farmers  maintain a deeply humble and submissive attitude and rather accept what the government proposes.

The Distributive Bargaining Theory of Institutional Change (Knight 1992, 1995) explains the findings of the study very well: The actor with the higher bargaining power will shape the bargaining for rules and ultimately pushes for the agreement that is most favourable for his interests. In the case presented, the three power resources governmental support, resource dependence and education and knowledge lead to the investment farms shaping an agreement that favours themselves, while local farmers did not have a choice but accept it. These three power resources set the investment farms in a better position to form the agreement to their distributional benefit.

Recommendations as a reflection of lessons learnt

As the whole resource setting and the traits of the actors in terms of their power resources are characteristics of agricultural foreign investment in a low-income country, the dynamics are likely to be repeated in similar settings. Therefore, the study is highly relevant when investigating the possible consequences of agricultural foreign investments on the local water situation, and its lessons can be converted into recommendations for both the Ethiopian government and the international community:

In order to have major recommendations implemented, organisations of development co-operation must request the respective governments to do so and assert and monitor them so that the local population have the chance to actively decide about their future.