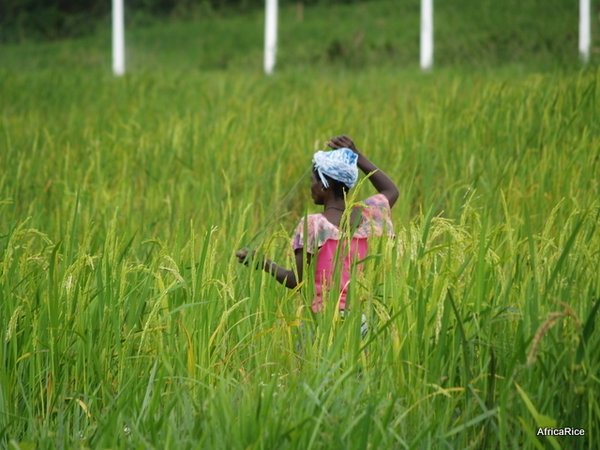 Farmers in West Africa could increase their rice yields by using a smartphone app – “riceadvice” – developed by the Africa Rice Center. The app mainly offers tailor-made recommendations for efficient mineral fertiliser use.

Thanks to a one-year project supported by the government of Japan, 200 trained service providers have helped more than 16,000 rice farmers in Mali and Nigeria benefit from “riceadvice, a customised crop management decision support tool, leading to increased productivity, efficiency and profits.
Developed by the Africa Rice Center (africarice), the “riceadvice” app, which can be freely downloaded through Google Play on Android smartphone or tablet device, generates tailor-made recommendations that help farmers in irrigated and relatively favourable rain-fed lowland areas in Africa apply mineral fertiliser more efficiently in order to optimise production and profits and reduce waste.

Farmers’ efficient use of mineral fertiliser coupled with good agricultural practices is one of the keys to enhancing rice production in sub-Saharan Africa, where the average yield is around 2.1 tons per hectare (t/ha), says africarice in a press release issued in late March. africarice studies have shown that the adoption of “riceadvice” recommendations can increase rice yield by 0.6 to 1.8 t/ha in farmers’ fields.

Partnering with GIZ and Syngenta to spread the app

According to the Deutsche Gesellschaft für Internationale Zusammenarbeit Competitive African Rice Initiative (GIZ-CARI), which is one of the important project partners of Africa Rice in Nigeria, a specific innovative element of “riceadvice” is that it is not only based on the agronomic conditions, but also on the financial capacity of the farmer.

CARI is helping in deploying the “riceadvice” technology to over 9,000 farmers in Nigeria through 97 trained service providers. “Farmers are happy with the significant improvement in yield and income that ‘riceadvice’ has brought to them and are eager to continue with the service,” say the CARI experts.
Syngenta Foundation for Sustainable Agriculture, another key project partner, recounted a similar success story from Kouroumari area in Office du Niger, Mali, where 99 per cent of the 600 farmers who benefited from “riceadvice” wish to reuse the service in 2017 and 44 per cent of them are ready to pay between 250 F CFA (about 50 cents) and 10,000 F CFA (about US$16) for “riceadvice” recommendations.

These were some of the highlights that were presented at the project closing meeting held at Africa Rice research station in Cotonou, Benin, on the 22nd February 2017. The meeting was organised to review progress and achievements, share experiences, and develop a follow-up plan after the end of the project. “We are pleased that nearly all the project targets have been achieved or even surpassed in some cases,” said Kazuki Saito, africarice agronomist and project co-ordinator at the meeting. The project’s aim was to boost rice productivity, maximise rice farmers’ investment potential and catalyse youth employment, contributing to food security and social stability in the two countries.
Africarice and its partners are now analysing the data from the project and are making follow-up field visits to assess the initial impact and identify mechanisms for the effective rollout of “riceadvice” in sub-Saharan Africa after the closure of the project.