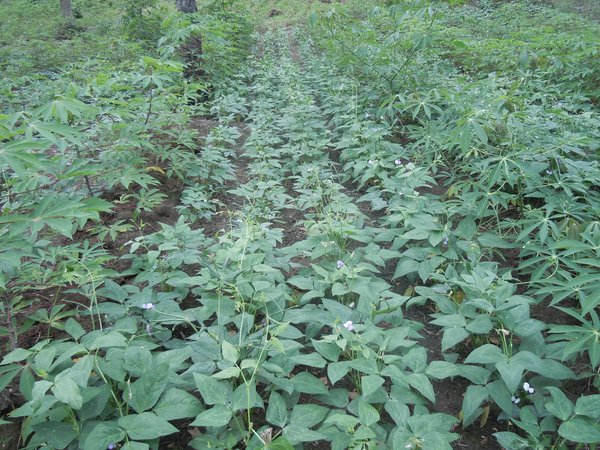 One factor of the research was to plant beans between the cassava plants. Beans absorb nitrogen from the air and store it as proteins.
Photo: © Ghent University

Soil fertility research from Ghent University, Belgium, succeeded to triple cassava yield of Ivorian smallholder farmers by applying integrated soil fertility management, which resulted in an eightfold increase of the profitability per household.

Cassava is a crucial stable crop for food security in southern Ivory Coast. However, yields and profitability are far below optimum. This huge yield gap is driven by the fact that cassava is grown on poor soils, as more fertile soils are reserved for cash crops such as oil palm and rubber.

Furthermore, farmers are not able to purchase agronomic inputs such as disease resistant varieties and fertilizer. In need for cash money, they uproot the cassava tubers already three to five months before full maturity. When harvested this early, the cassava tubers are poor in starch and full of fibers and water, hence have a low quality.
In an experiment with 20 farmers at two locations in Ivory Coast, soil management researchers Pascal Boeckx, Stefaan De Neve and Jean-Baptiste Gnélié Ghanoua  from Faculty of Bioscience Engineering, Ghent University, Belgium, succeeded in tripling the cassava yield from six tons to 17 tons per hectare. To do so, they applied the principle of integrated soil fertility management.
“First of all, we used improved varieties of cassava that are resistant to the cassava mosaic virus”, professor Boeckx explains. “Then, we strategically applied moderate quantities of organic and mineral fertilizer.”

The power of legumes

Another important factor is to grow a legume crop in between the different cassava plant. The researchers designed a pattern of cassava plants in rows of two meters, leaving half a meter space in between each plant.
Between the cassava, they planted beans or peas. These plants absorb nitrogen from the air and store it as proteins. Boeckx explains: “Bean or pea plants feed the cassava plants next to them. Combining cassava and legumes on the field also leaves less space for weeds.”
Planting legumes between the cassava has another important advantage: farmers and their families can enjoy a richer diet, with more proteins coming from the peas and beans on the cassava fields.

Doing so, the researchers succeeded to triple not only the cassava yield, but they also managed to add three tons per hectare of legume grains using this technique. This resulted in an eightfold increase of the profitability per household, derived for 40 per cent from cassava and 60 per cent from beans or peas the researchers announced.
This project was funded by the Belgian Inter-University Cooperation (VLIR-UOS) and directed by Ghent University (Belgium), in collaboration with the earth science unit of Felix Houphouet Boigny University in Ivory Coast, and involved number of local institutions such as the National Extension Service (ANADER), the National Center of Agronomic Research (CNRA) and the Switzerland Center of Scientific Research (CSRS).

More information:  Watch a 20 minutes video of the project (also in local languages).

The results of the project are discussed in following scientific papers