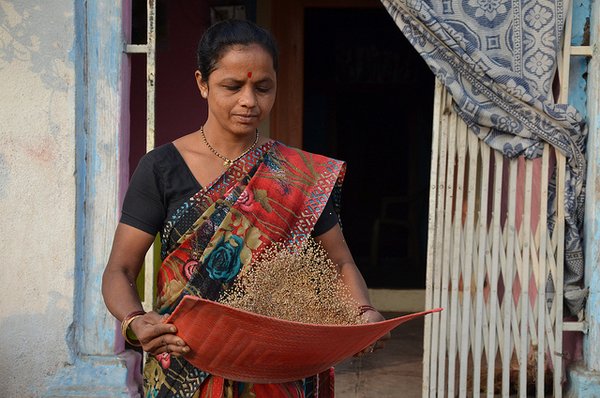 A new study has found that pearl millet bred to be richer in iron was able to reverse iron deficiency in school-aged Indian children in six months, reported HarvestPlus in May 2015. In just four months, iron levels improved significantly.

Previously, the same iron-rich pearl millet had been shown to provide iron-deficient Indian children under the age of three with enough iron to meet their daily needs, and adult women in Benin with more than 70 percent of their daily needs.

Pearl millet is eaten daily by more than 50 million people in the semi-arid regions of India and by millions of people in Sahelian Africa. The iron-rich pearl millet variety used in this study was developed in partnership with the International Crops Research Institute for the Semi-Arid Tropics (ICRISAT) in India.

These results are consistent with a previous efficacy trial also funded by HarvestPlus in the Philippines in which iron levels improved for women who ate iron-rich rice.

Dhanashakti is planted by tens of thousands of farmers

The iron-rich pearl millet variety used in this study, ICTP-8203Fe, is commonly known as Dhanashakti, which means prosperity and strength, and was commercialised in 2012 in Maharashtra, India, by the HarvestPlus partner Nirmal Seeds. Tens of thousands of farmers have planted the new iron-rich variety that also provides more zinc, is high yielding, and disease and drought tolerant.

Biofortification can contribute to lowering the supply of micronutrients. But critics warn against the dependence trap that could threaten small farmers. They are suddenly reliant on seed from outside, and on prices they have no influence over. Another criticism put forward is that the goal should be to feed the population with diversified foodstuffs from their own region. There is concern that biofortification of individual food crops will lead to this goal being watered down.