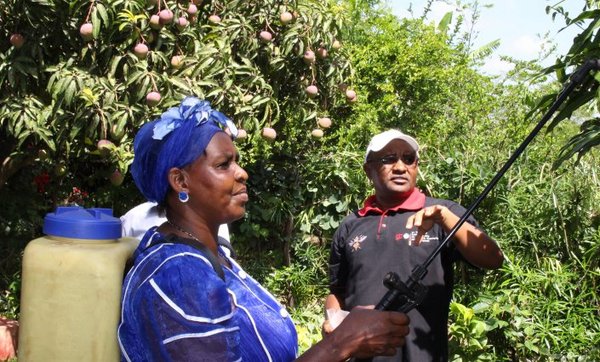 A protein-based fruit fly bait to attract and kill pests is boosting incomes for fruit and vegetable farmers in Kenya. Tested in fields across Africa, the product is helping to overcome yield losses and costs 70 per cent less than other commercially available products.

A protein-based bait for fruit flies has been produced to reduce the significant fruit and vegetable losses experienced by farmers in Kenya. Fruitfly Mania™, developed by a public private partnership between the International Centre of Insect Physiology and Ecology (icipe) and Kenya Biologics, is made from waste brewer’s yeast – an industrial by-product – and represents a cheaper alternative to commercially available pesticides.

The direct damage that fruit flies cause to fruit and vegetable crops, along with the subsequent loss in export opportunities, are estimated to cost Africa over €1.8 billion annually. “Over the past 20 years, icipe and partners have conducted extensive research to address the fruit fly challenge in Africa. The Centre’s aim is to reduce yield losses and the huge expenditure incurred by growers to purchase synthetic pesticides,” says Dr Segenet Kelemu, icipe director general. “We also intend to contribute towards reducing the health and environmental risks associated with the use and misuse of such chemicals, and increase the global competitiveness of fruits from Africa.”

The protein bait product is laced with an intoxicant which attracts female fruit flies and kills them when they feed upon it. Continued application of the product on a weekly or bi-weekly basis, until the fruits are harvested, interrupts the fruit fly’s breeding cycle and reduces the female population in orchards. According to icipe’s research from pilot trials in fields across Africa, Fruitfly Mania™ reduces maggot infestation in fruits from over 80 per cent to 5-9 per cent of the fruit produced. Farmers who use the product and ensure orchard sanitation are guaranteed a 66 per cent gain on their income, translating to roughly 236,692 Kenya Shillings (KSh) (€ 2,160) per hectare of orchard, per season.

Launch of a commercial manufacture of ManiaTM in Kenya

A facility to mass manufacture Fruitfly Mania™ was officially launched in Muranga County in March 2017, and is the first of its kind in sub-Saharan Africa. Operated by Kenya Biologics, the facility has the capacity to produce 2,000 litres of Fruitfly Mania™ per day, sufficient quantities to meet the demand from Kenyan households that rely on mangoes for their livelihood. A 400 millilitre (ml) bottle of Fruitfly Mania™ costs 250 KSh (€ 2.4), 70 per cent less than commercially available fruit fly protein baits currently available on the market. The trademark has been registered for this product in Kenya, and once the product is registered across Eastern Africa to include Tanzania and Uganda, the bait will benefit approximately 600,000 mango growers.