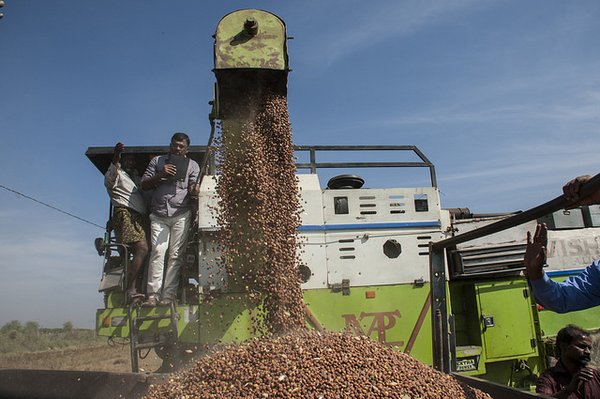 The International Crops Research Institute for the Semi-Arid Tropics released a semi-erect chickpea variety that can be machine-harvested. With standard machinery, 2.25 tons can now be harvested within 75 minutes. This usually took three days.

Mechanisation of chickpea harvesting is desired by Indian farmers for saving cost and time. So far, the existing popular chickpea varieties grown in India have inadequate height and a semi-spreading growth habit, and, thus, these are not suitable for combine harvesting. Now plant breeders at the International Crops Research Institute for the Semi-Arid Tropics (Icrisat), based in Hyderabad/Andra Pradesh, have developed several promising breeding lines. NBeG 47, a desi chickpea line with a semi-erect growth habit, was found promising and suitable for mechanical harvesting and has been released by Icrisat for cultivation in Andhra Pradesh.

“Currently, chickpea farming in Andhra Pradesh is partially mechanised – the crop is cut manually and then fed into a threshing machine. The total mechanisation of harvesting is cost effective and quicker, reducing the risk of the ripened crop’s exposure to untimely rain or other extreme weather conditions,” said Dr Pooran M. Gaur, Principal Scientist, Chickpea Breeding at ICRISAT.

According to Dr Jayalakshmi, the farmer will keep a portion of seeds for his next crop and make available this new variety to other interested farmers in the region.

She further noted that machine harvesting was better for the health of the labourers, especially women, as handling the crop causes painful dermatitis due to its high acid content.

The demonstration of the variety was recently held at Vennapusapalli village of Andhra Pradesh, where local community leaders and farmers from other villages learned about the new variety.

Dr Jayalakshmi explained that the variety, which had been derived from a cross between an ICRISAT line ICCV 2 and a local line PDG 84-16, grew to a height of 60 centimetres under prevalent conditions in southern India. Like paddy or wheat, it is amenable to mechanical harvesting. The new variety was developed through a project titled “Developing chickpea varieties suitable for machine harvesting and tolerant to herbicides” funded by the Department of Agriculture and Cooperation, National Food Security Mission, Ministry of Agriculture, Government of India.