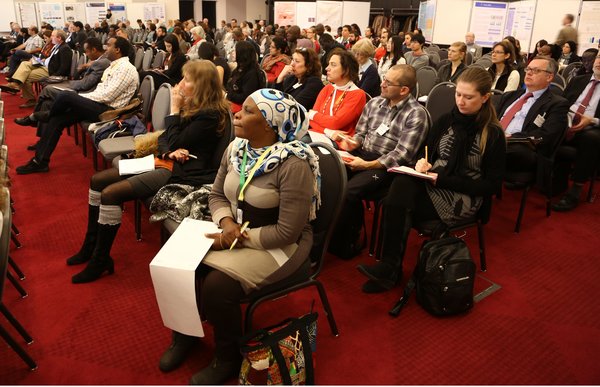 A vast number of case studies were presented at the conference.
Photo: © A. Emmerling

How to combat hidden hunger?

World-wide, over one third of deaths among children under five years old are associated with malnutrition. Scientists, field workers and representatives from government, private sector and civil society met at the 2nd International Congress on Hidden Hunger to exchange experiences.

Almost every third human being suffers from hidden hunger, i.e. a lack of micronutrients, and world-wide, around 170 million children under the age of five years are stunted. Africa and Asia are particularly strongly affected. There, more than half of the children in this age group suffer from stunting. World-wide, over one third of deaths among children under five years old are associated with malnutrition. Among these children, mortalities are significantly more frequent than among children with a sufficient supply of micronutrients. This was reported by Robert Black of the Bloomberg School of Public Health at Johns Hopkins University, Baltimore, USA, at the 2nd International Congress on Hidden Hunger. The event was held at the University of Hohenheim in Stuttgart, Germany, in early March.

What the mother eats is crucial

However, the course for a child’s healthy development is set long before birth. Black maintains that the mother’s state of health already plays a central role ahead of conception. Surveys from India show that around a third of stunting can be traced back to a reduced growth of the foetus. Therefore, Black believes that measures applied only during pregnancy are insufficient. There are a wide range of consequences arising from a lack of micronutrients during the period in the womb. For example, iodine deficiency reduces growth, while a lack of iron slows down neurological development. If women are administered iron compounds, this will have a positive effect on the children’s performance at school, as studies have shown. Not only is hidden hunger a human tragedy, it also causes costs for the economy. Black demonstrated that a country spends eight per cent of its economic performance on undernutrition.

The period following birth up to the second year of life is just as important in a child’s development as the period in the womb. In most middle- and low-income countries, babies and infants do not receive adequate and sufficient food after the breastfeeding phase. Above all, small children do not obtain enough zinc and iron. In addition to money, however, mothers frequently lack the knowledge needed to maintain a balanced diet for themselves and their children. A case study in Western Kenya showed how adding five wild local plants to food ensured that meals contained the recommended dosage of iron for women and for infants of up to 23 months of age. Therefore, combining local knowledge and local plants with science was a demand heard again and again at the conference.

Surveys by Katja Kehlenbeck of the World Agroforestry Centre (ICRAF) demonstrated that local food trees can make an important contribution to a nutrient-rich diet, too. In addition to fruit, these also include trees such as the Moringa, the baobab or the bread fruit tree, the fruits of which even serve as staple food. The leaves of the oil palm are a valuable provider of nutrients, too. For example, just nine grams of oil palm leaves cover an adult’s daily vitamin C requirement. Some baobab varieties also have a very high vitamin C content. And fresh moringa leaves are true nutrient bombs. A hundred grams of them contain three times as much vitamin C as an orange and ten times as much vitamin A; they also have high levels of calcium and iron.

Properly combined, indigenous food trees can provide a family with vital micronutrients throughout the year, as surveys from Kenya and Tanzania demonstrate. This is above all important during the hunger gap in the period between August and December. At the same time, the leaves and fruits are an important source of income for the women. Kenyan farmers grow eight to 13 fruit trees rich in vitamin A, and almost all of the farms examined have mango trees. However, Katja Kehlenbeck stresses that as mango cultivation increases, varieties are grown containing less vitamin A than the local varieties. For food trees to become an integral element of food, it is essential to develop location-specific food tree portfolios which are culturally accepted and locally sourced.

Inappropriate food is a bigger killer than HIV/AIDS

Diets change as nutrition transition increases. In West Africa, for example, adult obesity rates increased by 115 per cent over the past 15 years, and today, mortalities on account of non-communicable diseases exceed those caused by HIV/AIDS. Gudrun Keding of Bioversity International examined the dietary patterns of women in Kenya and Tanzania and arrived at the result that women’s diets clearly reflect greater diversity, only that this diversity often merely comprises the consumption of more sugar, white flour and white flour products or other products rich in calories – at the expense of micronutrients. Above all younger women tend to prefer such a diet. However, changes in dietary habits coincide with a different perception of being plump or thin. For example, in Tanzania, “plumpness” is regarded as something negative, like in Northern countries. The survey demonstrated that the consumption of energy-dense food not only poses a problem in urban areas but is also on the increase in rural areas. Dietary patterns ought to be established to achieve a balanced diet, Keding maintained.