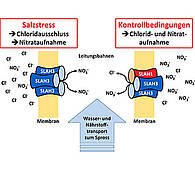 How plants are able to grow on saline soils

Increasing salinisation of soils is a problem for agriculture worldwide. Researchers at the University of Wuerzburg have now studied how plants regulate salt uptake. Their results could be important for breeding salt-resistant species.

Irrigation of agricultural areas is increasing worldwide, leading to salinisation of soils, i.e. the accumulation of sodium and chloride ions. However, elevated levels of chloride have a toxic effect on plant growth.

Conversely, a plant need the nitrate anion as the most important source of nitrogen to assemble proteins and replicate its genetic heritage in DNA. Researchers Dietmar Geiger and Rainer Hedrich at the University of Wuerzburg in Germany have now studied if and how plants are able to distinguish between the nutrient nitrate and the poison chloride. They have presented the findings of their work in the current issue of the journal Current Biology.

In their study the researchers explain how elongated cells running through the plant’s body like a system of tubes conduct water and nutrients from the roots to the shoots, while specialised cells in the interior of the roots load the tubes with nutrients extracted from the soil. The Wuerzburg botanists discovered two anion channels in these loading stations, SLAH1 and SLAH3, which regulate the passage of nitrate and chloride.

In collaboration with a Spanish research team headed by Dr José M. Colmenero-Flores at the Instituto de Recursos Naturales in Seville, the Wuerzburg researchers investigated genetically modified plants which lacked SLAH1 and SLAH3. These mutants had only half the amount of chloride ions in the sap rising to the shoot in the channels. The nitrate content, however, was unchanged, leading the researchers to conclude that both anion channels regulate the entry of chloride to the shoot.

To locate the anion filter responsible for nitrate in the channels, the researchers subsequently investigated the channel molecules in more detail. For this, they measured the anion current through SLAH1 and SLAH3 directly, using biophysical methods. “We observed that SLAH1 is not capable of conducting anions on its own and SLAH3 mainly conducts nitrate,” is how Rainer Hedrich describes the unexpected result.

The researchers found the explanation of this curious finding in further studies. “The apparent contradiction between nitrate and chloride content in the control plants and the mutants was resolved when we brought the two anion channels together,” the researchers explain. It turns out that the two channels together form a functional complex. “Whenever SLAH1 enters into the complex, the anion filter in SLAH3 switches from nitrate to chloride, and vice versa.”

The Spanish research team provided the answer to the question where this switch plays a role. To identify the chloride-nitrate switch in the plant, they simulated a saline soil environment. The higher the salt contamination the roots of the test plants had to deal with, the more SLAH1 was withdrawn from the anion channel complex, and the chloride conducting complex gradually evolves into a nitrate conducting complex. The plant does this in order to maintain the supply of nitrate as an essential source of nitrogen without being damaged by the increase in the chloride concentration due to salinisation.

The studies of salt tolerance in plants by the Wuerzburg botanists and their colleagues in Seville and Riyadh have demonstrated an entirely new concept of anion uptake regulation in root vascular tissue. According to the researchers, the discovery of the regulatory anion channel SLAH1 will also have implications for optimising salt-tolerance of cash crops.