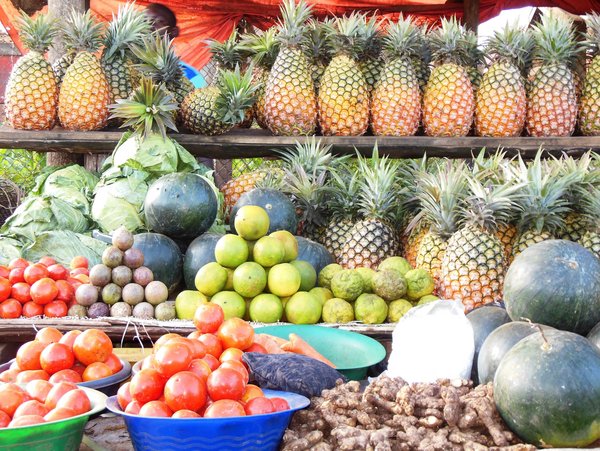 New research findings and policy challenges related to global agri-food system transformation were discussed at the 3rd GlobalFood Symposium at the University of Göttingen.

Is international agricultural trade good or bad for combating hunger and poverty in the developing countries? Which strategies are best suited in the agricultural sector to promote sustainable development? What is changing for farmers in the Global South through the spread of sustainability standards and the use of information and communication technologies? These and other questions were discussed at the 3rd GlobalFood Symposium in Göttingen, Germany, in late April 2017. The Global Food Symposium is held every three years by the University of Göttingen’s GlobalFood Graduate College (GRK) in collaboration with the International Food Policy Research Institute (IFPRI).

With around 70 lectures and 30 poster sessions, senior and junior researchers from 35 countries presented new research findings and discussed policy challenges related to global agri-food system transformation. The topics ranged from development policies, food governance and household welfare through issues concerning agricultural production and technologies, market participation of smallholders and the role of sustainability standards to aspects such as consumer preferences, dietary diversity and the role of women in modern agri-food systems. A brief selection is given in the following.

Food security, price volatility and the power of standards

It is undisputed that food price volatility poses a threat to food security, especially for people living near or below the poverty line; their food secure status can quickly turn into food insecure. The effects of financialisation and speculation on volatility have been examined in numerous studies. But how do export restrictions impact on food price volatility? To find this out, Bernhard Dalheimer, Bernhard Brümmer and Tinoush Jamali Jaghdani of the University of Göttingen took a look at developments on the international wheat markets from 2002 to 2015. They found not only that Argentina was the country with the largest number of export restrictions but also that export restrictive policies significantly increased price volatility. Quotas had the most pronounced effects. The young scientists therefore suggest more binding regulations to be adopted in the next round of negotiations on the General Agreement on Tariffs and Trade; from a volatility perspective, they do not see an apparent need to ban tariffs.

The role of private standards for manufactured food exports from developing countries was examined by Malte Ehrich and Axel Mangelsdorf. They wanted to see whether the proposition that standards can help developing countries to integrate in global value chains could pass a practical test. To find this out, they evaluated more than 50,000 IFS (International Featured Standards) audits from around 12,000 companies in 87 countries from 2008 to 2013. The result was that while IFS certification increases exports on average, the effects remain robust for high-income countries only, whereas the potential of IFS to integrate low-income countries in value chains is limited.

In Ghana, the economic growth of the past years has been accompanied by a structural transformation of the economy and progressing urbanisation. Since 2010, less than 50 per cent of the population have been living in rural areas. Olivier Ecker of the International Food Policy Research Institute (IFPRI) looked at changes in diets in rural Ghana over the years and the role played by agricultural diversity in this context. Ecker assumes that dietary diversity is positively correlated with dietary quality and, hence, nutrition. His surveys have confirmed that farm production diversity matters for dietary quality; however, the effects are smaller in the South than in the North of the country (where market penetration and access are less developed). The conclusion he draws is that in regions that undergo economic transformation, policies and programmes that support rural income growth may be more effective in dietary quality than those to promote farm production diversification. The latter may be ineffective among smallholder farmers if the farm households face staple food shortages and the interventions do not increase household incomes.

Do the nutrition and livelihoods of women automatically improve when they have access to knowledge and to markets? This issue was raised by a team headed by Paul E. McNamara of the University of Illinois, USA. The scientists presented the results of an impact evaluation in production-oriented extension services in Bangladesh. The women were given special advice e.g. on the production and use of vermicompost or on aquaculture. In order to improve access to markets for women farmers, agreements were signed with traders. Once a week, they offered a selling point in the villages where the women could collectively sell their goods. Thanks to these two measures, the women’s income rose by 25 to 44 US dollars per month. The assumption that women tend to spend more on nutrition and health than men was also confirmed: With the rise in household income, food security and dietary diversity of the households increased too.

Gender aspects were also the focus of research by Haruna Sekabira of the University of Göttingen. The young scientist wanted to know whether the use of mobile phones can contribute to gender equity and improved nutrition in smallholder households in Uganda. He set out from the assumption that nutrition effects of mobile phone use can occur through various pathways, for example, as also referred to above, via better market access and related income gains among women or because women empowerment – in this case through easier access to news services and information thanks to mobile phones – may raise their nutrition knowledge and awareness, which could also contribute to improved dietary practices. His analyses revealed that female mobile phone use has stronger positive welfare effects than if males alone use mobile phones. He concludes that equal access to mobile phones cannot only foster economic development, but can also contribute to gender equality, food security, and broader social development.

So is digitisation the silver bullet for smallholder empowerment? It is a fact that in many African countries, public service provision is lacking e.g. in infrastructure, social protection and education, with the poor being disproportionately excluded from these services. It is a further fact that the use of voicemail and SMS can reduce the cost of communication by up to 50 per cent as compared with in-person visits. At the same time, mobile phone coverage has risen strongly on the continent. Jenny Aker of Tufts University in the USA has been doing research on the promises (and pitfalls) of ICT for agriculture initiatives for many years – and she warns against too much euphoria. Her surveys have shown that the quality and timing of information is crucial to how it is actually used by the farmers. Also, standardised information for such a sector as heterogeneous as agriculture is only useful to a certain degree. In addition, the question arises which technology – simple mobiles, smartphones, … – is available to the farmers and how they use it. Lack of experience with a given technology can result in their not fully engaging with ICT-based agricultural interfaces. And as wonderful as it might be, digitisation cannot solve all existing information asymmetries.