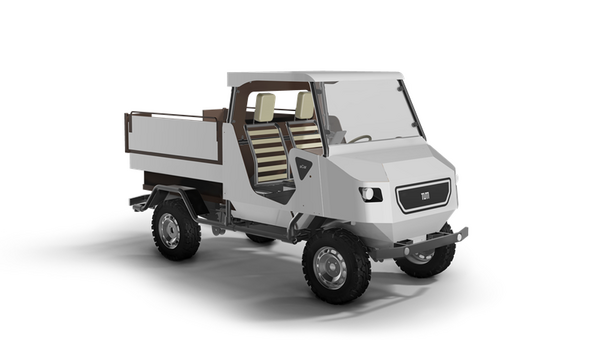 The “aCar” (CGI) will make e-mobility possible even in regions with poor infrastructure, particularly south of the Sahara.
Photo: © Technical University of Munich

The “aCar” project at the Technical University of Munich, Germany, will make emobility viable for the rural population in poor regions with weak infrastructure.

In an interdisciplinary research projects, scientists at the Technical University of Munich (TUM) have developed an electric vehicle, the “aCar”. The “aCar” was developed by four TUM institutes in close cooperation with partners from Germany and several African countries. In autumn 2016, the Federal State of Bavaria recognised the concept with the Bavarian State Prize for Electromobility in the category “Sustainable Product & Mobility Concepts".

For many, the term “electric vehicle” brings to mind expensive e-cars driving on well-built roads in the industrialised nations. The electric car developed at the TUM was primarily developed for the rural population in remote regions with poor infrastructure, and particularly the African nations south of the Sahara. The stated goal of the interdisciplinary research team is to offer a mobility concept which contributes to preventing the rural exodus to the cities and strengthening the autonomy of rural regions.

For this reason, the “aCar” has to be usable in a wide range of ways. It is an all-terrain vehicle, can be charged with solar electricity, and above all is modular in design. With different superstructures, it can transport people or other loads, and with additional modules the car can also serve as a farming tool or a power source for other equipment. Being of modular design, the basic vehicle can be offered at comparatively low prices. Depending on the area for use, the necessary additional functional modules can be bought or leased.

It was important to the researchers to modify not only the potential uses but also production of the vehicle for local conditions. The “aCar” is designed for local manufacture, making possible local and independent value-creation processes. The institutes of automotive technology, material forming and casting, industrial design and strategy and organisation cooperated closely to meet the project’s various challenges.

The vehicle’s concept was developed jointly with research partners in Nigeria, Ghana, Kenya and Tanzania. An initial prototype was presented early in the year, and the various components are currently being tested. Using the knowledge gained from this, the interdisciplinary team plan to build a second prototype early in 2017. The project will be presented to the public at the German automobile fair IAA in September 2017.