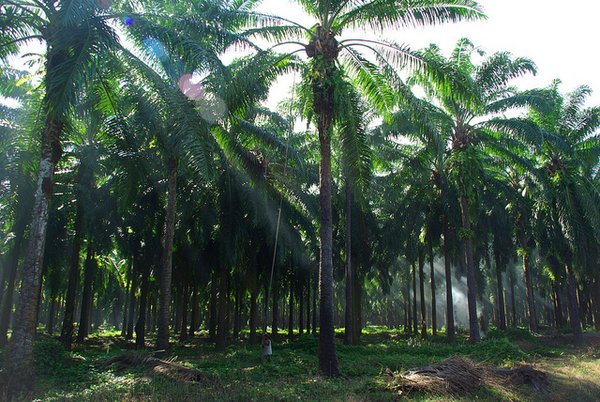 The palm-oil industry produces an abundance of waste that could be used as feed in livestock production.
Photo: © DFAT photo library

Scientists in Malaysia are perfecting a method to produce high-protein animal feed from palm waste by using the fungus Aspergillus terreus. This new method could offer a potential outlet for by-products of palm oil production.

Farmers often use agro-industrial waste — such as rice bran — as animal feed, but these crop residues lack protein, vitamins and other nutrients, a study by Malaysian scientists says. In the study, the scientists from the University of Malaysia Perlis (UniMAP) present first results on how to produce large amounts of protein in palm-oil waste. They used the fungus Aspergillus terreus in the fermentation process of palm pressed fibre and palm oil decanter cakes, two types of palm oil milling residue.

This approach is cheaper than adding micro-ingredients to the initial low-cost feed, the team says. The method would also make use of waste from the flourishing palm oil industry.

According to a 2007 report by the United Nations Environment Programme, 30,000 square kilometres of forest will be lost each year in Indonesia by 2020 to make room for growing oil palm plantations. “We opted to focus our research on palm oil agro-industrial waste due to its abundance in this industry,” says co-author Zarina Zakaria, a biotechnology researcher at UniMAP. “Fermenting the palm oil by-products with the fungus for seven days at 32 degrees Celsius increased their protein content from 159 to 401 milligrams per litre for palm-pressed fibre, and from 146 to 493 milligrams per litre for palm oil decanter cake,” he adds.

Zakaria also notes that the research is still in its early stages, but that with further testing, it would be possible to replicate the process using different types of agro-industrial waste with other strains of microorganisms.

Previous efforts have explored the potential of fermenting materials such as coconut dregs, orange waste, rice bran or banana peel, says the paper, published in the Pertanika Journal of Tropical Agricultural Science in February.

Experts of the UN Food and Agriculture Organization (FAO) they have stressed the importance of using agro-industrial by-products as livestock feed, for instance by making “densified feed blocks” from straw. However, there are hurdles ahead to turn the fungus fermentation method into a profitable way to produce animal feed on a large scale, the experts note and add that the production of single-cell protein through fermentation of agro-industrial by-products requires technical expertise and proper infrastructure.