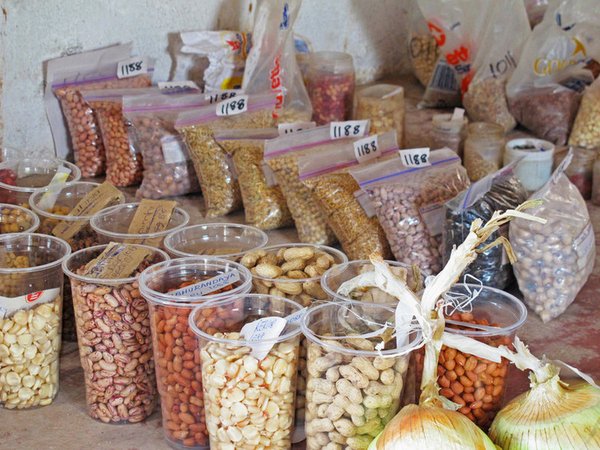 Seed is the most important input for crop farmers the world over. But how the farmers get to their seed is just as diversified as the world’s cultures themselves. Practices range from the Nepalese self-supplier to sophisticated propagation systems in the industrialised nations. At the 19th “Tropentag” at the University of Bonn, Germany, numerous examples were demonstrated, and simple methods to ensure seed providing a greater yield were presented.

Good seed offers the basis for high-quality food and satisfactory yields. Urs Scheidegger of the University of Bern, Switzerland, demonstrated just how much significance is attributed to seed world-wide at the 19th “Tropentag”, describing transformations and differences among the developing and industrialised countries. In the South, between 60 and 100 per cent of farmers still use their own seed. For this purpose, they simply keep part of the harvest for the next season’s sowing. In the North, this amounts to 60 per cent at the most, and many farmers buy new seed each year.

This coincides with the increasing significance of seed quality checks. In sophisticated systems such as that of Germany, breeders test new varieties for several years before these are registered and allowed to enter the market. The checks concentrate on quality parameters such as germination capacity, seed being free of disease and undesirable contaminants, as well as safe genetics. In Germany, this practice is ensured via “Z-seed”. In the USA and India, seed is put on the market with a “Trusted Label”, and the United Nations Food and Agriculture Organization (FAO) also labels valuable tested seed.

Grain for the market and seed

This has led to the development of formal seed producing systems in which the farmers, as buyers, are usually at the end of the chain. In contrast, in the Global South, the farmers choose their own varieties based on their own experience, which does not involve additional costs.
In the Nepalese region of Lamjung, anyone asking others for seed is regarded as a bad farmer. Therefore, seed is hardly ever swapped, even among neighbours, whereas in Mali, the exchange of seed has a high social status. “Seed, as source of life, has to be shared with those who ask,” noted Fred Ruttande of the University of University Wisconsin-Madison/USA, explaining the situation in Mali.

The level of development that a seed producing system has reached also depends on the crop involved. For example, red turnips and onions seldom show spontaneous mutations, so that special breeding is required to achieve modifications in the characteristic of a variety. Although varieties are swapped with neighbours and friends in Mali, they are hardly registered and are not described anywhere, so that there only very little improvement is  achieved in quality.

Yield is not the only aspect

Nathalie Oberson of the Bern School of Agricultural, Forest and Food Sciences (HAFL) described an initial level of improvement in Chad. In her project there, eleven groundnut varieties, 16 kinds of millet and 38 sorts of sorghum are cultivated. In 2016, all sorghum varieties were sown on a selection of farms, and the farmers chose the varieties they preferred according to conventional criteria such as drought tolerance and disease resistance. In the following year, between four and ten varieties were “tested” at experimental centres, which amounts to a small-scale national variety trial. Next year, the varieties will be certified, and by 2019, they will be on the market.

In this manner, Oberson established a small breeding programme with her work over a period of four years. She interviewed farmers for her survey regarding the criteria they based their selection of new varieties on. Farmers gave criteria different weightings, and yield did not come first. To the women, for example, the sweetness of the stalk of the sorghum plant, which can reach a height of up to 2.50 metres, is crucial because they can sell it on the local market as “sugar cane” for the equivalent of ten euro cents.

The dual use of the grain both as food for humans and to produce alcohol by having it ferment plays a role that is at least just as important as yield. Further criteria referred to for new varieties were the colour of the grain and its suitability for threshing. In Chad, food security is expressed among the subsistence farmers by more than the mere level of yield. It includes the traditional integration of the plant in the families’ entire living and farming.

The price of seed plays a crucial role for farmers. In Nepal, simple seed with a safe label is already 50 per cent more expensive than what the farmers grow themselves. Certified seed costs twice as much, and hybrid seed is ten times as expensive. In the low mountain range areas of Nepal, at the base of the Annapurna, the topography is so steep that the rice terraces are just two metres wide. Further mechanisation is hardly feasible, so that high-value, expensive seed can hardly develop its potential HAFL staff member Rahel Wyss explains. However, better specialist practice and improvements in storage, for example, already offer improvements in the food situation with the varieties that are now grown.

Improving seed production offers new income options for farmers, who can diversity their earnings with seed propagation. In Mali, the “Union locale des producteurs de céreales de Dioila” (ULPC) integrates 2,500 members in a simple production of improved seed. In 2016, 380 tons of certified seed was developed, and the Union has been successful with its market strategy of mini-packages, offering smallholders high-quality seed in 100-gramm packages.

Outside the world market

The propagation systems described by the scientists are outside the world markets and of no interest to the major agro-chemistry investors. Rattunde therefore recommends the countries to set up a “Central Seed Committee” that is to demonstrate the rules and advantages of external seed propagation. Here, open access to the natural resources is just as important as monitoring. For as Rattunde emphasises, enough money is available thanks to support provided for example by the German Federal Ministry for Economic Cooperation and Development (BMZ) and “Deutsche Gesellschaft für Internationale Zusammenarbeit” (GIZ). It can be employed both to control the sector and to create value for the entire chain. It is up to the countries themselves to support their farmers. For as Rahel Wyss put it, food security is seed security.