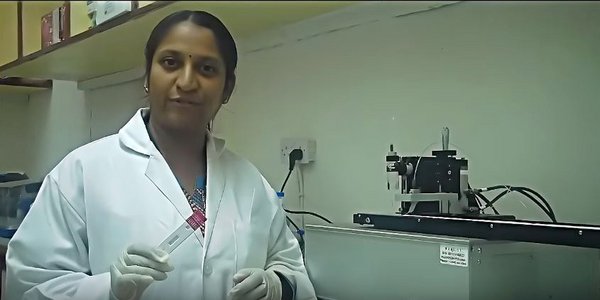 A new technology that detects aflatoxins on location can save lives and open export markets for African and Asian countries: the rapid test kit device. Combined with a mobile extraction kit, it will be the first portable cost-effective way for farmers and others to detect aflatoxins instantly.

The International Crops Research Institute for the Semi-Arid Tropics (ICRISAT) developed the rapid test kit for aflatoxins. It is a simple, non laboratory-based kit that can be used directly by non-technical people such as farmers, agro-dealers and food processors. Currently, the test can be applied to detect aflatoxin in groundnuts.

The test kit was launched at the ICRISAT research centre in Malawi at the end of July. It requires only limited technical knowledge or training, and testing can be done on location. For example, the kit can be used by traders to check for contamination before concluding a sale. Rapid detection is useful for public health authorities to help identify suspected samples in cases of an outbreak of aflatoxin poisoning.

The compact portable device is based on the lateral flow immunoassay test (popularly known as the strip test, and similar to the one used to detect glucose in human blood). If aflatoxin is present in the sample, then one pink line appears on the strip, whereas if the sample doesn’t have any aflatoxin, two pink lines will appear.

“The device will contribute to managing and reducing the entry of aflatoxins in the food value chains, improving diagnosis for local and export trade and supporting the food processing industry to maintain low exposure levels in food products in our local markets as well as for export markets,” said Dr Anitha Seetha, a scientist at ICRISAT, Malawi.

The UN Food and Agriculture Organization (FAO) estimates that 25 per cent of all crops in the world are affected by aflatoxins. Groundnut, maize, sorghum, pearl millet, chilies, pistachios, cassava and other food products are contaminated by aflatoxin every year. They not only affect human and livestock health but can also impair the marketability of food products. Many countries reject imports of agricultural products that exceed certain levels of aflatoxin, costing farmers millions of dollars a year.

“ICRISAT has been working with smallholder farmers in Africa to combat the aflatoxin problem. This kit will enable rapid and cost-effective deployment by the government and private sector to protect public health and also improve the export prospects for African countries,” said Dr David Bergvinson, Director General, ICRISAT.

Aflatoxin-contaminated food can pose a serious health risk and is carcinogenic. Symptoms of aflatoxin poisoning include: liver cancer, fluid retention, increased incidence of Hepatitis B infection, and stunting in children. In poultry and livestock, aflatoxin can cause feed refusal, loss of weight, reduced egg production and contamination of milk. Tropical countries are primarily affected, which includes the majority of Africa, India and other south Asian countries.