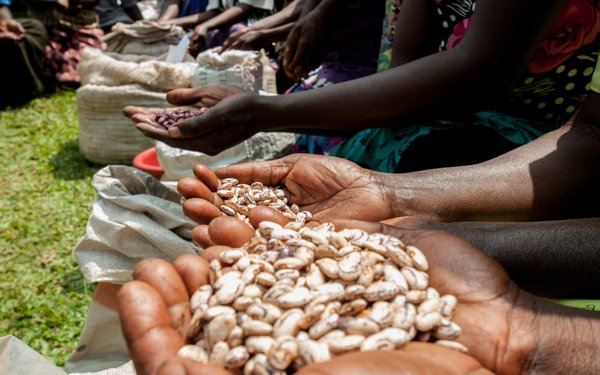 The Government of Uganda released the first five high iron bean varieties that will provide more iron in the diets of millions of Ugandans who eat beans almost every day. Three of the released varieties are bush beans and two are climbers.

Five new bean varieties bred with high iron and resilience to the impacts of drought have been released in Uganda for the first time.
The varieties – co-developed by the Ugandan National Crops Resources Research Institute (NaCRRI), the Rwandan Agricultural Board (RAB) and the International Center for Tropical Agriculture  (CIAT) through HarvestPlus – were released as part of the Ugandan government’s strategy to tackle malnutrition and reduce anaemia in the country, especially in children and expectant mothers.

In Uganda, anaemia, which is used as an indicator of iron deficiency, afflicts almost one out of two pregnant women and 50 per cent of children under five. Consumption of high iron beans has been proven to increase iron percentage in blood. The new beans will complement other strategies that are currently in place to address iron deficiency.

Impacting women, children, and infants most severely, iron deficiency is one of the commonest micronutrient deficiencies in the world. Lack of iron can impair cognitive and physical development. Severe anaemia, often caused by iron deficiency, increases risks to women during childbirth, and can cause death. Despite efforts to curb iron deficiency through supplements and fortified foods, it remains the most widespread nutrition deficiency, affecting an estimated 1.6 billion people world-wide.

Dr Stanley Nkalubo, head of bean research at the National Crops Resources Research Institute (NACRRI), said the iron beans would provide a cheap source of nutrition among poorer communities. “Beans are the main source of protein to the Ugandan population, especially those in institutions such as schools, hospitals and prisons. Having them biofortified provides an excellent opportunity to add iron, an important micronutrient to these diets,” Nkalubo maintains.

The new high iron bean varieties were bred by the National Agricultural Research Organization (NARO) with support fromHarvestPlus, USAID Feed the Future and CIAT, using conventional breeding methods. Farmers who took part in the field trials liked them because of their yields, taste and preferred size and colours. Mothers who have fed their children on the high iron beans have observed that their children are more active and perform better in school.

During the next season, HarvestPlus and its national and international partners will multiply the high iron bean varieties and support their dissemination through government institutions, non-government organisations and seed companies. The seed packs will be branded, so that any one purchasing them can easily tell what they are.