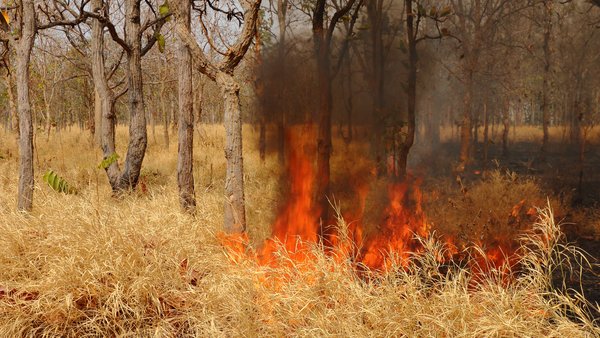 Fires are currently the most significant disruptive factor in many forests around the world.
Photo: © Can Stock Photo / thanasus

Droughts, fires and wind as well as insects and fungal attacks: all of them result in stress for the forests of the Earth – and they are all influenced by climate change. A study by an international research team shows that climate change significantly influences disruptive factors all around the world.

About a third of worldwide land surface is covered by forests, but knowledge about how disruptive factors that affect them interact with one another in the context of global climate change is still lacking, as these are often analysed separately and on a local scale. Now for the first time, an international team of scientists has comprehensively examined possible climate impacts on disturbances in forests. The team did this on a basis of more than 600 research papers of the last 30 years. Published in the scientific journal Nature Climate Change, their results show that increasing risks for forests have to be expected in the future.

“When climate is changing, there are initially direct effects on the growth of the trees. But the chain of climate impacts is considerably longer: if, for instance, more rain saturates the soils or if soils are less frequently frozen, the trees will have less stability to withstand storms and damage will increase. The many dead and dying trees will then provide ideal breeding material for insects such as bark beetles to reproduce quickly. At the same time, the trees that are still alive will be weakened and will thus be more vulnerable to insect attacks,” explains lead author Rupert Seidl from the University of Natural Resources and Life Sciences in Vienna, Austria.

“Whether in the giant boreal forests of Scandinavia and Russia or in the wide woodlands of North America – fundamentally, natural disturbances like fires, insect attacks or storms are normal aspects of these ecosystems,” says project leader Christopher Reyer of the Potsdam Institute for Climate Impact Research (PIK), Potsdam, Germany. To get shaken up a little through natural disturbances can even be good for forests, as the natural renewal for instance promotes a greater biological diversity, he adds.

“But through climate change, these usual disturbances have already changed in the last years”, explains Reyer. “This has impacts on the ability of the forests to provide services for us humans – for example in terms of their wood, in terms of protection against avalanches, or simply as recreational spaces. If climate change keeps on increasing disturbances, this clearly is a risk for the coping capacities of the forests – in the long run, ecosystems as we know them today might change profoundly.”

Climate change as a challenge for forest Management

For the review study, forest experts from ten European countries analysed more than 1600 different findings from academic publications which establish links between disruptions and climate factors. Additionally, the scientists examined how indirect climate impacts, such as the alteration of tree species in the forests, influence the occurrence of disturbances. In particular the indirect effects and the interactions between different disruptive factors were collated in an unprecedentedly comprehensive manner in the research on forest disturbances.

Fires are currently the most significant disruptive factor in many forests around the world, and will become an even more serious threat in the coming decades, according to the scientists. The forests of Northern and Central Europe, however, have until present primarily been impaired by storms such as Cyclone Kyrill in 2007, and the insect damage that follows them – a type of damage which will also increase under climate change. Damage caused by ice and snow were the only disruptive factors examined by the study that will likely decrease under continuing climate change. However, this positive effect cannot compensate the negative effects from other factors.

“Our analysis clearly shows that climate change brings enormous challenges for forests – the forest sector has to adapt and to increase its resilience, as it seems impossible to prevent damage completely”, says Seidl. “In the long term, reductions of greenhouse-gas emissions and effective climate protection measures will help the most,” adds Reyer.