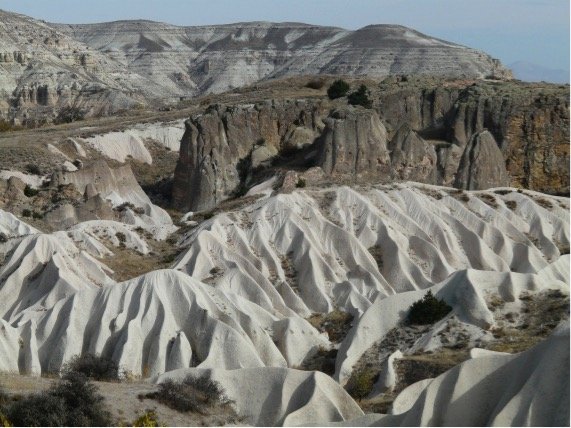 The Taurus Mountains in Turkey are rich in basalt deposits.
Photo: © pixabay

Farming with crops and rocks to address global climate, food and soil security

With a large-scale use of silicates as fertilisers, agriculture could achieve its climate targets, and soil erosion could be slowed down, suggest an international team of researchers in a new survey. As yet, however, the ecological consequences of global application are unclear.

Rock and tailings from mines as a clearance for agriculture – what an international team of researchers are now proposing in the specialist journal Nature Plants seems unusual at first. Silicate in the form of basalt occurs as volcanic rock across the world. This mineral is not entirely unfamiliar to agriculture. However, its potential for combating climate change has perhaps been underestimated so far.

Basalt is treasured as a subsoil in many regions because it contributes to fertile soil for crops. It decomposes rather quickly, releasing phosphorous, potassium, calcium, magnesium and iron – valuable nutrients for plant growth. “It has long been known by human communities that volcanic plains are fertile places to cultivate crops without causing any health hazards,” explains David Beerling of the UK’s University of Sheffield, and lead-author of the study.  So far, however, only little thought has been given to how the application of rock in soil can bind carbon.

This is exactly what decomposed basalt does. Rain also always binds small amounts of carbon dioxide in the form of carbonic acid. When the slightly acidic rain coincides with basalt, the rock reacts and forms bicarbonates that now store the carbon from the rain in the soil. If between 10 and 50 tonnes of basalt a hectare were to be applied alone to the USA’s maize and soy fields, global emissions from agriculture could be reduced by up to 13 per cent – 1.1 billion tonnes of CO2 equivalent.

“Such strategies for the active removal of CO2 would have massive impacts and could be applied very quickly,” Beerling stresses. Ultimately, the carbon would be washed out of the soil in a stable, inorganic form and bound in the seas for at least 100,000 years.

Both economically and ecologically, using silicates as fertilisers could make sense for farmers.
For one thing, soils are currently being destroyed twice as fast as they regenerate naturally, the authors of the study stress. Decomposing basalt renews the nutrient content of soils and counteracts hyper-acidification, which is caused by fertilisers such as ammonium, sulphur or urea. Also, basalt indirectly raises the amount of organic carbon in soils, promotes the formation of soil aggregates and develops physical protection of the decomposing biomass.

The second advantage of using basalt fertiliser is the higher yield. Although only little research has been done on this aspect, the small number of known examples seem encouraging. For example, one survey states that at least 20 tonnes of basalt applied per hectare enhanced sugar cane yield by up to 30 per cent in five successive harvests. Another survey demonstrated that after fertilising the soil with silicate slag, sugar cane, maize and rice yields were still higher than without fertilising even three to four years after its last being applied.

The third advantage that basalt application offers is better protection against diseases and harmful insects. Decomposing basalt forms silicic acid, which is taken in by plants. One of the effects that this has is to raise the hardness of stems and cell walls in leaves and roots. Also, indirectly, silicic acid activates the plant’s immune system.

For a climate-relevant effect to develop, fertilising with silicate would have to be applied in large areas, the authors write. The UN Food and Agriculture Organization (FAO) has designated 800 million hectares of cropland world-wide as particularly productive. An across-the-board application on these soils would require at least nine billion tonnes of basalt a year. The survey therefore recommends starting in regions with large areas under cultivation and high levels of productivity, where the method would be most economical, such as in the USA, China, India and Russia as well as France and Germany.

Ecological impacts yet to be researched

Just like with other measures currently being considered to slow down climate change, many ecological issues still remain unsettled here. Basalt extraction inhibits both the regions in which the rock is mined and the CO2 balance as a whole. And after fertilising, silicates and, owing to decomposition, other substances are washed out and ultimately accumulate in the seas, where they could form large quantities of additional sediments and influence the pH value. Scientists therefore recommend that silicate fertilising first be intensively tested in field trials. The CO2 binding potential would have to be further examined, and the social and ecological questions would need to be answered.

See also scientific article by the Potsdam Institute for Climate Impact Research:
“Enhanced weathering of rocks can help to suck CO2 out of the air – a little”