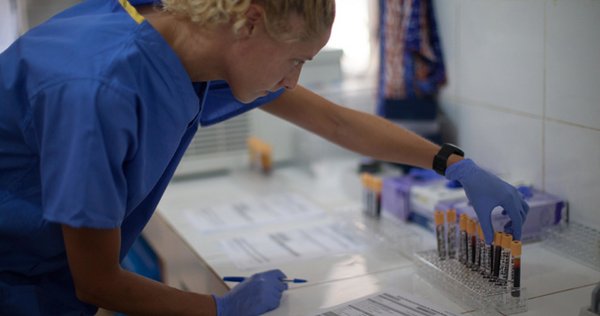 The tested vaccine ‘rVSV-ZEBOV’ has proved a safe vaccine resulting in lasting formation of antibodies against the virus.
Photo: © WHO/S. Hawkey

The clinical phase 1 trial of a potential vaccine against the much-feared Ebola virus was completed successfully at four sites in Africa and Europe. The scientists participating in the study are members of a consortium of experts created by the WHO whose goal is rapid and coordinated clinical testing of the Ebola vaccine in Africa.

The outbreak of Ebola virus disease in 2014 was declared a public health emergency of international concern by the World Health Organisation (WHO). In August 2014 the Canadian government donated 800 vials of the replication-competent recombinant vesicular stomatitis virus (rVSV)–vectored Zaire ebolavirus (rVSV-ZEBOV) candidate vaccine to the WHO.

In late 2014 the VSV Ebola Consortium (VEBCON) was created under the auspices of the WHO to initiate phase 1 studies of the  ‘rVSV-ZEBOV’ vaccine to facilitate rapid progression to phase 2 and 3 trials in affected countries. The German Centre for Infectious Diseases (Deutsches Zentrum für Infektionsforschung – DZIF) is part of the Consortium.

When presenting the study in May, Dr Marylin Addo, professor of infectious medicine at the University Medical Centre Hamburg-Eppendorf (UKE), explained that the results on tolerance, safety and immune response for the candidate vaccine are very promising, adding that the antibodies formed against the virus were still demonstrable even after six months. ‘This means that a one-time vaccination should provide lasting protection against Ebola,’ Addo believes. Dr Addo headed the study in Hamburg. A total of 158 healthy adult volunteers were tested at Hamburg, Geneva (Switzerland), Lambaréné (Gabon) and Kilifi (Kenya).

A vaccine is still urgently needed, as the current Ebola epidemic is still not finally defeated, and further outbreaks cannot be ruled out in future.

Information on the study

The vaccine used is an attenuated genetically-modified vesicular stomatitis virus (VSV) carrying a surface protein of the Ebola virus. The immune system of the vaccine recipient is to form antibodies which help prevent the disease in the event of contact with the Ebola virus. The scientists tested the vaccine's safety, tolerance and immune response in humans for the first time.
The study shows that in all the subjects the immune system was stimulated to form antibodies specifically against the Ebola surface protein. These antibodies prevented infection by the Ebola virus in vitro, and were still demonstrable even after six months. The researchers rate the risk-benefit profile as positive.

The results of the work are now being used in further studies employing the identified optimal dose, and are particularly looking at children. Locations for these studies include Lambaréné, Gabon. The vaccine has already been tested in Guinea in a major study, where people who had been in contact with Ebola patients were vaccinated. Initial results demonstrate the effectiveness of the vaccine. FDA approval is sought by the start of 2017.