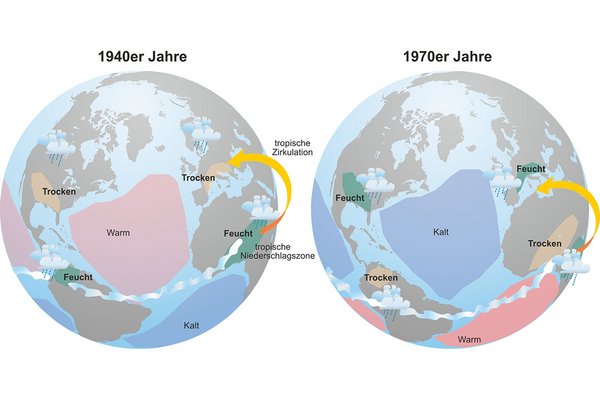 Southward shift in the tropical belt between the 1940s and 1970s.
Photo: © Stefan Brönnimann, Bern University

Droughts resulting from the shift in the Tropics

The tropical belt has been expanding since the 1980s with major impacts on areas of precipitation and drought worldwide.

A series of dry summers between 1945 and 1954 resulted in central and southern Europe in the total loss of harvests, and were followed by wet summers. Conversely, during the same period there was regular precipitation in the Sahel region, while the same region was hit by deadly droughts thirty years later.

A new study published in 'Nature Geoscience’ shows that this and other climatic extreme events are connected globally. A team working with climatologist Stefan Brönnimann at the University of Bern assembled new datasets on atmospheric circulation in these periods. This data showed that the whole tropical belt moved southwards between the 1940s and 1970s, also causing droughts.

Atmospheric circulation in the tropical belt consists of ascending air in the tropical convergence zones, associated with intense precipitation, poleward flows at high altitudes, and descent in the subtropics, where many of the Earth's zones are located. During the series of dry summers in the years around 1950, central and southern Europe were still frequently affected by the subtropical high pressure areas, while conversely the Sahel region was in the innertropical precipitation zone.

The southward retreat of the tropical belt accordingly made high pressure conditions less frequent in central Europe in the following decades, so that summers were wetter. At the same time the Sahel region was suffering from fierce droughts because the tropical precipitation band moved further south.

Eight global datasets show the shift in circulation. According to the researchers, the cause of the shift is that the southern hemisphere warmed strongly compared to the northern hemisphere between 1945 and 1980. ‘It pulled the entire tropical belt in its direction,’ says Stefan Brönnimann from the Institute of Geography and Oeschger Centre for Climate Change Research at the University of Bern.

This is shown by simulations with a climate model which uses ocean surface temperatures. The researchers suspect that both cooling aerosols in the northern hemisphere and changes in the ocean itself may have contributed to this shift.

There has been a new trend since the 1970s, with the tropical belt expanded and the arid zones moving polewards. With ongoing climate change, a further widening of the tropical belt is expected, and with this a further poleward movement of the dry zones.

‘Our study shows that fluctuations in the tropical belt may play an important role in droughts around the globe,’ Brönnimann comments. The team of researchers note that knowledge of atmospheric circulation conditions during past climate fluctuations may help us better understand future climate change. ‘We have only just started on the collection and organisation of sufficient data at the global level,’ warns Brönnimann.