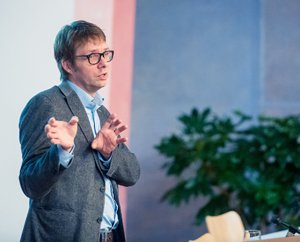 Conversion of grasslands – is new thinking going on?

Grasslands are the largest terrestrial ecosystems and habitat to 800 million people. However, these grasslands are threatened. At this year’s World Food Day Colloquium at the University of Hohenheim in Germany, experts viewed the topic from various angles.

The transformation of the grasslands has already been in progress for decades. In Africa, for example, around 660 million hectares has been turned into cropland since 1850, most of which used to be savannah land. Here, the transition from slash and burn systems to permanent cropping systems played a major role. However, countertrends exist as well, for instance in the former Soviet Union. Especially in Kazakhstan, the abandoning of crop production has led to the emergence of grasslands.

The biggest driving force for the conversion of grasslands is population pressure and the need for additional food. This development often goes hand in hand with conflicts between herders and farmers, as Professor Regina Birner of Hohenheim University explained at this year’s World Food Day Colloquium on the 16th October. Further important factors include the growing demand for renewable resources and rising prices for agricultural commodities. They are causing the value of land to increase, which in turn is leading to more speculating with land. Over the last few years, large-scale land acquisitions have been on the increase, especially also in Africa. Land rights play a key role in this context. “We can observe that wherever the land rights of the local population are not clearly established by law, large-scale land acquisitions have taken place,” Birner noted. “The issue of land rights is one of the most important instruments when it comes to the use and governance of grasslands.”

Birner maintains that strengthening the land rights of smallholders is one of the strongest instruments to prevent the transformation of grasslands into arable land. Community-based land titles could also be an effective approach. Furthermore, international standards and certificates like the ones that are nowadays common in the forestry sector could be considered, so that in future, grasslands certified products might be available. However, it is essential to increase the production and productivity of land that is already converted, especially in Africa, in order to reduce pressure on the grasslands. Birner called for more research, for example on the intensification of the grassland ecosystem.

Grasslands are home to the remaining large herbivores, for example elephants in Africa. They are characterised by high botanical and high ecological diversity. And world-wide, they are second only to the rainforests as important carbon sinks. Each time grassland is turned into arable land, considerable amounts of climate-relevant trace gases are released. “In the grasslands of the tropics, around 20 to 30 per cent of biomass is bound underground. These carbon sinks are lost when land is converted,” said Professor Folkard Asch of Hohenheim University. Moreover, arable farming only makes use of the soil on a seasonal basis. “In the tropics, land lying fallow is threatened by wind and water erosion,” he explained. Therefore, unlike when grassland was used in pastoralism, arable farming was often unsustainable there. The disappearance of the grasslands would harm the climate and also change the social structures that people there were living in.

It is estimated that Africa has around 300 million hectares of potential cropland. However, Asch questions this figure, because the amounts referred to differ by up to 60 per cent, as he told the meeting. Moreover, satellite images do not provide any information on what is actually done with the grasslands, e.g. in livestock herding activities, in their use for medicinal plants or in seasonal land use change, or on the fact that they provide a habitat for animals. The agricultural expert called for the conservation and a sustainable use of the grasslands. In his opinion, animal produce should come mainly from the grasslands, but, wary of his own proposal, he added, “talk to the consumers about prices”.

He was supported by his colleague Professor Hans K. Biesalski. The nutrition expert noted that grazing animals convert grass, which humans cannot digest, into a valuable source of nutrition for people. Meat and milk is important for the supply of proteins and micronutrients, for the bioavailability of iron and zinc is significantly higher in animal food than it is in vegetarian food. This also applies to vitamin A.

The example of Switzerland shows that a lot can be gained from grasslands without conversion to cropland. Florian Leiber of the Swiss Research Institute of Organic Agriculture (FIBL) had a look at the potentials that grasslands have if the production system as a whole is properly managed and that have not even remotely been exhaustively made use of in many parts of the world. A survey by FIBL examined the question of whether grassland-based production in dairy cattle systems in Europe was possible without losing yield to a large degree. A total of 52 organic farms were examined over a period of six years. The result was that the farms maintained the same yield, calving intervals stayed at the same level, and the costs of veterinary treatment were reduced. “A milk performance of 25 kilos per day can easily be achieved with roughages,” said Leiber. However, this does not work if higher milk performance is desired. In the case of high-performance races such as Holstein Friesians, at least 30 kilos a day is required to achieve the same efficiency as in a lighter race. “We need the right genotype for grassland-based farms,” the Swiss agricultural expert stressed and called for “flexible systems and flexible animals; the high yield animals are not the best ones.”

However, intensive dairy-farming as practised in Switzerland and in other European countries cannot simply be transferred to other regions and cultures. Leiber demonstrated this with the aid of pastoralism on the Tibetan Plateau. Here, in the summer, the families take their herds to the mountain pastures, which are increasingly being overused. The grass in the valleys remains unused. “This is unproductive,” Leiber said. Although resources are plentiful, it takes far too long for the livestock to reach slaughter age. By contrast, pastoralism in Switzerland is more sophisticated. Whereas the livestock remain in the mountain pastures during the summer, haymaking is in progress in the valley meadows, which provides feed stocks needed for the winter. Although both systems are fully transhumance, they differ in one crucial aspect. In Tibet, the whole family move to the summer pastures, whereas only one person does this in Switzerland. The rest of the family stay in the valley where they tend to the meadows there. “The challenge is to find out how the system could be changed without destroying the entire culture. It is a culturally and politically complex question,” Leiber maintained. “Intensifying the use of grassland would not be a problem technically.  In fact, the techniques are quite simple. But we need social solutions.”

How can people survive on maintaining the grasslands? This was the key question in the final discussion. Smart use of natural resources was one answer, and changing the value chains so that people living on the grasslands could benefit from them was another. As a local expert from Kenya, Daoud Abkula of the International Institute for Environment and Development, raised another issue in the discussion. “Governments don’t like moving people,” he explained. “They settle them in hotspots, which are drylands.” This clashes with the fact that pastoralists need mobility to adapt to the natural resources. “It is a complex situation, but new thinking is going on,” Abkula noted.