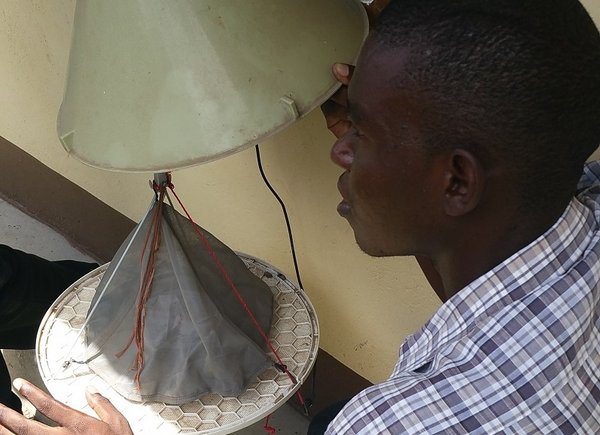 The use of a newly-developed mosquito trap incorporating human odour has resulted in a 70 per cent decline in the population of the most significant malaria mosquito on the Kenyan island of Rusinga. The number of malaria infections then declined by 30 per cent, according to a study by researchers from The Netherlands, Kenya and Switzerland.

A newly-developed mosquito trap outsmarts malaria-transmitting mosquitoes. It attracts the insects by emitting a natural lure – namely human odour - composed of lactic acid and other substances transpired by the human skin. The mosquitoes approach the trap and are sucked in by a fan running on solar energy.

A study by a team of researchers from the University of Wageningen, the Kenyan International Centre of Insect Physiology and Ecology (ICIPE) and the Swiss Tropical and Public Health Institute (Swiss TPH), showed that the trap resulted in a 70 per cent decline in the Anopheles populations on the Kenyan island of Rusinga. The number of malaria infections decreased by 30 per cent. It is the first study to show a positive health effect of mosquito traps. Therefore, the trap could become a decisive tool to eradicate the disease.  The study was published in July 2016 in the scientific journal „the Lancet“.

According to Willem Takken from the University of Wageningen and co-author of the study, the trap kills the insects without relying on insecticides. There is no negative impact on the environment and it is very unlikely that the mosquitoes will become resistant, says Takken.

The success of the new approach lies in the combination of the odour-baited trap with mosquito nets, anti-malaria drugs, and a solid social strategy, the researcher notes. The odour-baited traps need electricity to operate, but there is no central electricity supply on Rusinga, an island in Lake Victoria. Solar panels were installed on the roofs of homes. These not only provided electricity for the mosquito traps but also supplied the homes with power for light and to charge a mobile phone. Great efforts were also made regarding education about malaria and actively engaging the inhabitants of Rusinga in the project. During the project, all households on Rusinga were equipped with a mosquito trap. Overall, 4’500 traps have been installed.

The odour-baited trap may also offer a solution to diseases like Dengue fever and the Zika virus, says Tom Smith from Swiss TPH, and adds that Aedes aegypti, the vector transmitting the Zika-virus and Dengue fever, are attracted by human scent and could possibly be contained by such a trap.

Every 30 seconds, a child dies of malaria. This disease costs Africa twelve billion dollars a year in health-care costs and lost productivity, particularly in the agricultural sector. Fighting malaria without using insecticides is vital to world food production. WHO formulated the aim of eradicating the disease by 2030. Therefore, new investments in developing drugs and vaccines and in fighting the mosquitoes are needed.