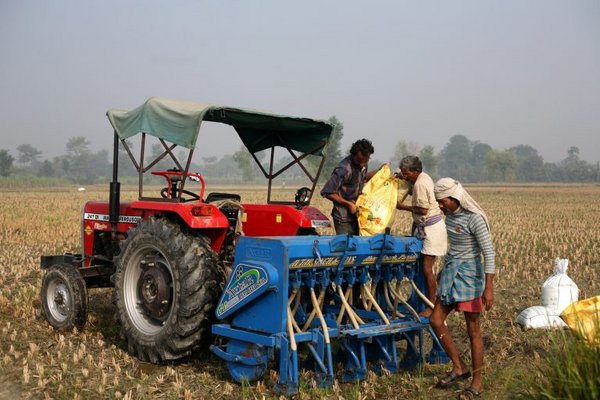 For the first time, zero tillage has been proven to dramatically boost wheat yields and deliver significant economic benefits to Indian smallholder farmers in seasons of excess rainfall.

A new study by the International Maize and Wheat Improvement Center (CIMMYT) involving more than 200 small-scale wheat farmers across 15 villages in Haryana state, northern India, showed that zero tillage of wheat into recently-harvested rice fields can lead to harvests of nearly 16 per cent more grain than farmers who followed conventional practices, when heavy rains fall late in the wheat season.

Conventional tillage for wheat in the study area of Karnal district is drawn-out, laborious and costly. Farmers remove residues of the previous rice crop, repeatedly run the tractor over the field to plough and prepare the soil, toss wheat seed by hand onto plots and finally plough it in using a rotary tiller.

“In conventionally tilled wheat plots, heavy downpours during grain development or near harvest can flood the field and sicken plants,” said Jeetendra Prakash Aryal, lead author of the study, published in Agriculture, Ecosystems and Environment, and an economist at CIMMYT.

In zero tillage, the wheat seed is inserted directly into the soil, through crop residues and standing stubble, at a precise depth and in a single tractor pass using a specialised seeding implement. According to Aryal, not ploughing and thus leaving the rice stubble and roots enhances the absorption and drainage of excess water and fosters a healthy crop.

Zero tillage for wheat is gaining in popularity in Haryana but is far from widespread. According to M.L. Jat, CIMMYT senior cropping systems agronomist and co-author of the study, farmers in the state grow more than 2.5 million hectares of wheat, mainly in rice-wheat rotations, but zero tillage is used on only 0.3 million hectares — just over one-eighth of the wheat area. Jat notes that Haryana farmers’ slow adoption of zero tillage appears to be losing money for all concerned. “Based on our results, if this climate-smart practice had been used for wheat on one million hectares in Haryana in 2014-2015, farmers would have harvested 660,000 tons more grain, worth about USD150 million,” he explains.

Vital grain of civilisation and food security under threat

Grown on 29 million hectares in India, mostly with irrigation during the country’s relatively drier winter months, wheat accounts for nearly a quarter of the dietary calories and protein in South Asia and furnishes income for hundreds of millions of farmers region-wide, the CIMMYT experts explain.
The crop suffers increasingly from climate change effects, including South Asia’s rising temperatures and progressively unpredictable rainfall. Studies have shown for instance that each one-degree Celsius increase in average night-time temperature — a decisive factor for wheat development — reduces yields by six per cent.

Weather data of 1982-2015 from the study region shows that untimely, excess rainfall during critical stages in the wheat season occurs once every four years. The 2014-15 downpours reduced the district’s wheat output by more than 17 per cent from what had been harvested the preceding year, the experts say.

The economic and environmental advantages of zero-tillage for wheat in South Asia’s rice-wheat rotations have been amply documented. Eliminating ploughing lightens tractor use, saving farmers diesel and reducing carbon emissions. Crop residues on the soil surface also help to capture and retain water in dry years.
“This is the first study to show that zero tillage provides higher yields for irrigated wheat where unexpected or poorly-distributed rainfall causes water logging under conventional tillage,” said Aryal of CIMMYT. “It means that zero tillage might be the best option for South Asian wheat crops under diverse conditions and particularly as climate change makes precipitation increasingly erratic.”