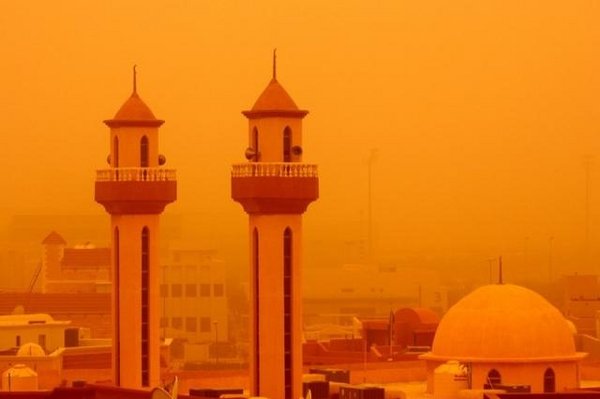 Climate-exodus expected in the Middle East and North Africa

Part of the Middle East and North Africa may become uninhabitable due to climate change, says a study by the Max Planck Institute for Chemistry and the Cyprus Institute. Hence the number of climate refugees could increase dramatically in future.

Researchers of the Max Planck Institute for Chemistry and the Cyprus Institute in Nicosia have calculated that the Middle East and North Africa could become so hot that human habitability is compromised. The goal of limiting global warming to less than two degrees Celsius, agreed at the recent UN climate summit in Paris, will not be sufficient to prevent this scenario.
The lead author of the study, Professor Jos Lelieveld, Director at the Max Planck Institute for Chemistry and Professor at the Cyprus Institute, fears that the temperature during summer in the already-very-hot Middle East and North Africa will increase more than two times faster compared to the average global warming. This means that during hot days, temperatures south of the Mediterranean will reach around 46 degrees Celsius by mid-century.

Lelieveld and his colleagues have investigated how temperatures will develop in the Middle East and North Africa over the course of the 21st century. The result is deeply alarming: Even if the Earth’s temperature were to increase on average only by two degrees Celsius compared to pre-industrial times, the temperature in summer in these regions will increase more than twofold. By mid-century, during the warmest periods, temperatures will not fall below 30 degrees at night, and during daytime they could rise to 46 degrees Celsius. By the end of the century, midday temperatures on hot days could even climb to 50 degrees Celsius. Another finding: Heat waves could occur ten times more often than they do now.

By mid-century, 80 instead of 16 extremely hot days

In addition, the duration of heat waves in North Africa and the Middle East will prolong dramatically. Between 1986 and 2005, it was very hot for an average period of about 16 days per year, by mid-century it will be unusually hot for 80 days per year.  At the end of the century, up to 118 days could be unusually hot, even if greenhouse gas emissions decline again after 2040.

Atmospheric researcher Jos Lelieveld is convinced that climate change will have a major impact on the environment and the health of people in these regions. “Climate change will significantly worsen the living conditions in the Middle East and in North Africa. Prolonged heat waves and desert dust storms can render some regions uninhabitable, which will surely contribute to the pressure to migrate,” says Jos Lelieveld.

The researchers of both institutes agree that climate change can result in a significant deterioration of living conditions for people living in North Africa and the Middle East, and consequently, sooner or later, many people may have to leave the region.