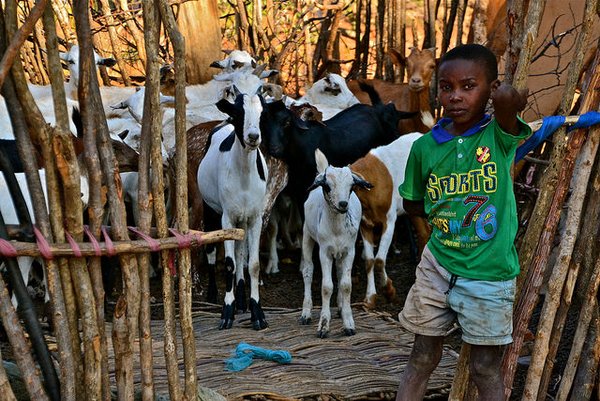 Climate change impacts on livestock – what do we know?

Despite scientific advances around climate impacts, how livestock will be affected is still a relatively uncharted scientific territory. A new CGIAR working paper summarises what we know about climate change impacts on livestock systems in Africa.

A new working paper from the Research Programme on Climate Change, Agriculture and Food Security (CCAFS) of the Consultative Group on International Agricultural Research (CGIAR) has been published on the impacts of climate change on livestock across Africa. The lead author of the new paper, Philip Thornton, is a scientist with the International Livestock Research Institute (ILRI) and CCAFS.

The study primarily covers livestock and climate impacts for Africa, but many findings, especially adaptation measures, can be applied globally. Authors conclude that the 2014 IPCC assessment contains only limited information on the projected impacts of climate change on livestock and livestock systems, compared with crops – a reflection on the relative amount of work that has been done. Thus, although progress on the topic has been made, it is clear that it is still in need of further collective scientific action.
With livestock systems already engaging 600 million farmers around the globe, and the livestock sector continuing to develop as demand for meat increases, more robust and detailed information is urgently needed, notes the study. This to better understand the trade-offs between various livestock adaptation options so that farmers and policy makers can make informed decisions around climate adaptation and resilience building.

Thornton looks at what we know about livestock and climate change in the study and states that the negative effects of increased temperature on feed intake, reproduction and performance on various livestock species is something that is reasonably well understood. For example, for most livestock species, such as cattle, sheep, goats, pigs and chickens, temperatures between 10 and 30°Celsius is when they perform the best. But for each 1°Celsius increase above that, all species reduce their feed intake by 3-5 per cent. Without a doubt, this will have far reaching effects on the quality and quantity of livestock species, warns the author of the study.
Increase in temperatures will also spell widespread negative impacts on forage quality and as a consequence, livestock productivity. The results from new simulations of the impacts of climate change on Africa’s rangelands, using what is called the ‘G-range tool’, clearly indicate that very substantial changes in livestock feed resources will occur, and these changes will be detrimental.

According to the study, many regions in Africa will see decreases in the quantity and quality of crop residues as well, further adding pressure on farmers and livestock feeding resources.
There are many options that can help livestock keepers adapt. The working paper illustrates trade-offs between various climate adaptation options that livestock farmers can take on. Options include changes in livestock breeds and species, improved feeding, better grazing and manure management, and use of weather information and weather-index insurance.

Many livestock adaptation changes will also involve transformation of farmers’ livelihoods, notes the author. Recent examples of such transitions include the adoption of camels and goats in addition to, or as a replacement for, cattle in drylands as a result of changing drought frequency and declining feed availability.
Although a number of adaptation options are available, and proven successful, there appear to be none that are widely applicable which do not have constraints and trade-offs. In addition, only little evaluation of the long-term sustainability of these transformations and their potential impacts on food security and livelihoods exists.
According to the working paper, unlike for cropping systems, there is currently only limited evidence for recent impacts on livestock systems. There is also much less certainty around the aggregated impacts of climate change on livestock systems with and without adaptation, as well as limited understanding of what increases in rainfall variability will mean for livestock species.

An enabling policy and technical environment could support farmers to adapt to climate change and enhance their livelihoods and food security.
There has been some progress since 2009, but we need much more work to ensure that we will have the knowledge and political support needed to build resilient livestock systems in the future, writes Thornton in the study and adds that a key question revolves around how we can create the political will to bolster the resources going into livestock research for development.