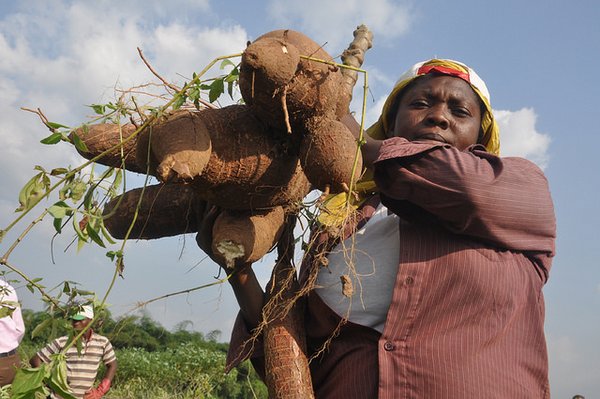 The DNA sequence information will support efforts to provide farmers with high-yielding varieties resistant to diseases.

Researchers at the International Institute of Tropical Agriculture have sequenced the genome of the cassava, enabling them to better understand the genetic basis of the plant’s disease resistance, quality and crop maturity.

A team of international scientists that has been studying DNA sequence information from cassava varieties grown all over the world has provided clear evidence on the ancestry of cassava. They have also published a high-quality genome assembly of the hardy crop which will be very useful in efforts to improve cassava.

Cassava is a very important food staple in sub-Saharan Africa, yet its yield and quality are compromised by two damaging virus diseases: cassava mosaic disease (CMD), causing disfiguration, curling, and yellowing of leaves, and cassava brown streak disease (CBSD), causing severe browning in the storage roots. According to a press release of the International Institute of Tropical Agriculture (IITA) in Ibadan, Nigeria, the new DNA sequence resources will help scientists develop varieties that are resistant to these virus diseases.

The research team comprised scientists from the International Institute of Tropical Agriculture (IITA), the University of California, the United States Department of Energy Joint Genome Institute (DOE JGI), and from National Agricultural Research Organizations of Tanzania, Nigeria, Fiji, and Micronesia, among others.

The team sequenced 58 wild and cultivated cassava varieties, including related species such as Caera or Indian rubber (Manihot glaziovii), and genotyped 268 African cassava varieties. The team has published the results in the April issue of the journal Nature Biotechnology.

“The development of genomic resources, such as this chromosome scale reference sequence, has increased understanding of the genetic diversity of cassava and its wild relatives, and given insights into its population structure. It is expected this will accelerate progress in basic biological research and genetic improvement,” says Morag Ferguson, Molecular Geneticist at IITA-Kenya and one of the scientists in this effort and co-author of the paper.

The study also provided clear evidence to support the hypothesis that cassava was domesticated from a wild species, known as M. esculenta subspecies flabellifolia, in the western part of the southern Amazon region in Brazil, and went through a “genetic bottleneck”, restricting the amount of genetic diversity in cassava.

This reduction in cassava genetic diversity, especially in Africa, was a result of the use of a limited number of parents in the development of new varieties. This is important knowledge to guide breeding decisions to restore lost variation.
“We are excited about the results of this study. As a clonally propagated crop, genetic improvement of cassava through conventional breeding is a complicated and lengthy affair. Therefore, understanding the genetic diversity of cassava and its wild relatives will support genome-enabled breeding efforts,” says Peter Kulakow, Head of IITA’s cassava breeding programme, based in Ibadan, Nigeria.