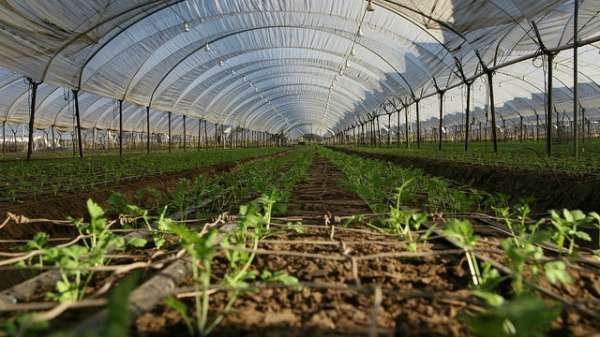 The researchers suggest a 150m2 greenhouse could produce up to 30kg of crops daily while providing additional fresh, desalinated water through night-time condensation.
Photo: © ProFlowers

A team of researchers at the Australian Murdoch University have designed an efficient, small-scale greenhouse combining desalination with food production.

Researchers in Australia are seeking to build a prototype ‘Bubble-Greenhouse’ that could provide remote, arid places with a low-tech, low-maintenance way to turn salt water into fresh water to grow food.

The engineers from Murdoch University, who published their study  in the journal Desalination in July, estimate that a 150-square-metre ‘Bubble-Greenhouse’ could produce around eight cubic metres of fresh water and up to 30 kilogrammes of crops each day. The sealed structure would protect crops from insects and disease, while the technology should be relatively simple to implement and use in isolated areas, they say.

The key to the concept is its novel humidification-dehumidification (HD) process, which projects to have a much higher water-production capacity than existing small-scale desalination technologies. In the HD system, solar or wind generation powers a regenerative blower which pushes air through finely-pored sinter discs located within a six-chamber column evaporator filled with saline water. The result is thousands of fine bubbles, with some special properties.

"The key to our effective evaporation process is the large air/water interface produced and maintained by a unique property of salt water," says PhD candidate and one author of the paper Mario Schmack. He adds, "Unlike in a freshwater bubble column where bubbles would continuously collide and join together as they oscillate upwards, it has been discovered that by adding salt to a floatation chamber, bubble coalescence is inhibited by a still unexplained property." A finer bubble stream means more surface area for evaporation, notes Schmack.

The scientist further explains in the paper that when the saturated air exits the top of the evaporator, it is channelled under pressure into a multi-stage condenser which collects fresh water and releases cooled vapour to humidify the greenhouse.

Greenhouse provides benefits around the clock

In their paper, the researchers suggest that a 150-square-meter greenhouse could produce up to 30 kilogrammes of crops daily, while providing additional fresh desalinated water through night-time condensation.

The Bubble-Greenhouse design is suitable for northern West Australia's climate, the researchers say. However, the concept may be also applicable to arid regions worldwide, where the social benefits and the simplicity of the concept will drive sustainable development of remote people,” the researchers believe.

The greenhouse has a lightweight aluminium frame and a special polycarbonate skin that allows the penetration of 60 per cent of photosynthetically active radiation while screening out most infra-red radiation, thus helping to moderate temperatures. Beyond this, the greenhouse components are manufactured from simple, sturdy materials that can easily be dismantled and stored. According to Schmack, simplicity is at the heart of the design, as desalination technologies such as reverse osmosis have proven untenable in remote areas due to their complicated nature.

"The Bubble-Greenhouse system relies on basic technology such as regenerative blowers and technically undemanding water pumps, so it is easy to implement and easy to maintain and repair by local people with limited technical means," Schmack says.