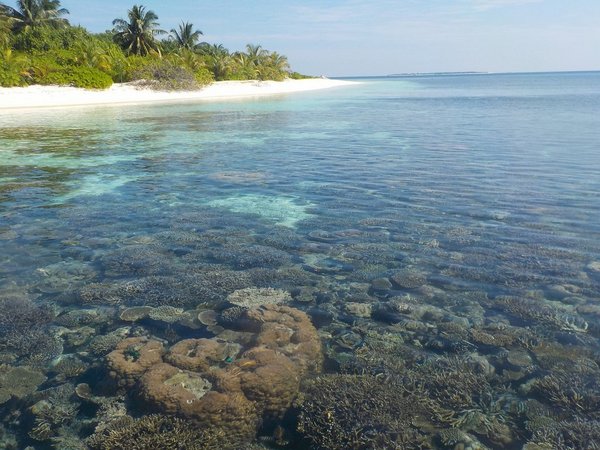 Coral reefs are a food source for millions of people in the tropics.
Photo: © Pixabay

Bright spots for the future of coral reefs

Coral reefs are a food source for millions of people in the tropics, but many do not deliver the expected catch any more. What influences fish abundance in these environments? An international team of 39 researchers explored this question on 2,500 coral reefs in 46 countries.

Inefficient fisheries management and good access to the nearest markets – these are some of the main factors for overfishing in coral reefs. An international study headed by Professor Josh Cinner of James Cook University in Australia shows that some reefs still have unexpectedly high fish abundance despite these conditions.

The scientists in Cinner’s team set more than 6,000 transects on coral reefs around the equator. “Certain parts of the reefs are marked using a line, and the number and species of fish are then documented in this marked area,” explains co-author of the study Dr Sebastian Ferse, of the Leibniz Center for Tropical Marine Ecology in Bremen/Germany,. Ferse examined reefs in North Sulawesi in Indonesia, which are among the most species-rich on the planet. The observations focused on species directly dependent on the reefs, among them economically valuable fishes such as wrasses, groupers or parrotfish.

In addition, the researchers collected a wide range of data on environmental conditions, fisheries management and socio-economic conditions at the coastal sites. The statistical analysis showed that the fish biomass on most reefs could be explained as a result of the considered factors. The size and accessibility of the nearest fish market, transport infrastructure, compliance with management rules and the local reef habitat had a strong influence on the biomass of reef fish.

“Roughly six per cent of the reefs were outliers and had a significantly higher or lower fish biomass than expected. Some reefs in almost pristine areas performed worse than others with high population density and fisheries.
“We were particularly interested in these bright spots with more fish than expected based on their exposure to pressures like human population, poverty, and unfavourable environmental conditions,” says Cinner. “To be clear, bright spots are not necessarily pristine reefs, but rather reefs that have more fish than they should have, given the pressures they face.” Among those locations were sites in the Solomon Islands, parts of Indonesia, Papua New Guinea and Kiribati.

The locations with more fish biomass than expected were characterised for example by an involvement of the coastal population in fisheries management, or where centuries-old fishery traditions with rules and restrictions had still survived.

Locations that positively stood out also included places where people are highly dependent on marine resources and are lacking alternative sources of income. Here, there is a considerable need for a sustainable use of reef resources.

According to Ferse, these exceptional cases provide a good basis to study how coastal communities have managed to keep their reefs in an unexpectedly good shape, thus going against the global trend. The study shows that in contrast, the locations with significantly lower fish biomass than expected were characterised by environmental pressures such as storms or coral bleaching, and in particular by technological improvements in fisheries, transport or refrigeration.

“The classical technical measures of fisheries management therefore run the risk of being traps leading to overexploitation of resources. Alternative approaches of fisheries management that include local populations should be considered instead,” says Ferse. “Tropical coral reefs are highly complex systems which react very sensitively to changes in their environments. Any type of protection or management must be based on an exact analysis of the local conditions.”

“We believe that our results can show and offer solutions for the conservation of coral reef fisheries,” explains Cinner. “Specifically, investments that foster local involvement and provide people with ownership rights can allow people to develop creative solutions that help defy expectations of reef fisheries depletion.”

For more information: The study has been published in journal “Nature” on June 15, 2016.