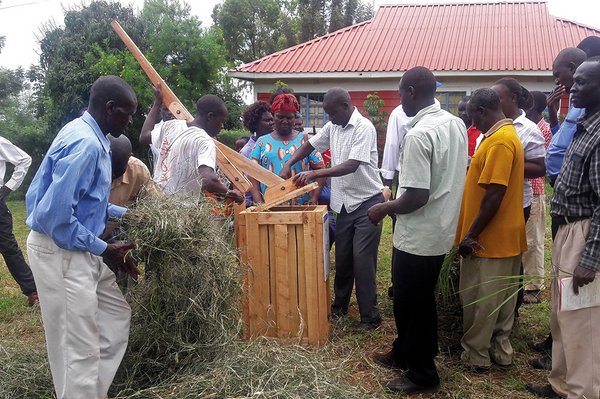 Bridging the knowledge and skills gap in dairy husbandry

Smallholder dairy production in Kenya has been identified as a key pathway to food and income security by the government. However, there is a lack of adequate knowledge and skills for effective milk production. In the context of the Green Innovation Centres for the Agriculture and Food Sector Programme of GIZ, 1,400 smallholder farmers in Western Kenya were trained in several husbandry-related practices. Our authors analysed the impact of the training programme.

Smallholder dairy production units account for over 80 per cent of total milk produced and marketed in Kenya (MoLD, 2010). Past efforts have been geared towards transformation of these units into market-oriented dairy production in line with key national policy development agenda items. Despite these efforts, the sector is still faced with a myriad of challenges at the primary production level, especially the knowledge and practical skills gap in general husbandry practices, which undermines milk production (SNV, 2013; Ojango et al., 2019).

A total of 1,400 smallholder farmers were trained in Bungoma, Kakamega and Siaya counties of Kenya on the four topics using a four-topic by four-day training cycle approach in May 2018. These farmers were evenly distributed in 27 sub-counties of the counties with a near parity gender participation of 52 per cent male and 48 per cent female. A questionnaire survey was carried out six months later, by randomly sampling 432 trained smallholder dairy farmers proportionately distributed among the three target counties. The questionnaire captured: a) innovations in the training content, b) its adoption, c) qualitative and quantitative evaluation of impact on farmers, d) comprehension of training content and e) other socio-economic benefits of training in addition to suggestions for improvement of future trainings. Data obtained was subjected to descriptive statistical analyses of frequency counts, percentages and means to determine the level of adoption, limitations to adoption and the impacts thereof.

This training module entailed varieties of fodder crops, their propagation, harvesting and conservation. The participants in fodder production training comprised farmers who had no knowledge at all (2.8 %) as well as those who were highly knowledgeable (9.6 %). All the ten topics delivered during training on fodder production except one (multi-purpose trees – MPT) had new lessons/ innovations for the producers. A respective 43.3, 33.5, 31.9, 25.2 and 20 per cent of the producers learned new concepts on new varieties (VAR), conservation (CONS), establishing fodder plots (PLOT), stage of harvesting (STAGE) and propagation (PROP).

Other concepts such as silage (SIL), hay (HAY), planting using the Tumbukiza method (TUM) and harvesting were fairly familiar to producers, with fewer than 20 per cent of producers viewing them as innovations. Adoption of innovations was highest in PLOT (65.6 %). Adoption levels above 20 per cent were also reported in VAR, PROP, STAGE, CONS and TUM innovations. The biggest hindrance to the implementation of innovations, especially silage making, on farms was the availability of material (MAT), which accounted for 41 per cent of non-implementation. 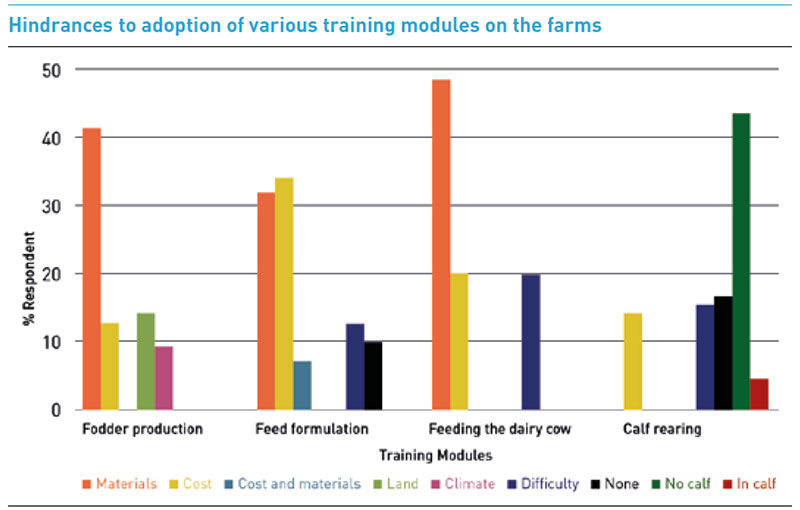 Emphasis here was on dairy cow husbandry and feeding at different stages of development and lactation. Concepts of feeding dairy cows were fairly well known to training participants with only 16.1 per cent of producers perceiving all the content taught in the module as new. Challenge feeding (CHF), total mixed ration (TMR) and weight-based feeding (WBF) were new innovations to over 40 per cent of participating farmers. What to feed when (WFW) and Categories/ type of feed (CAT) were new to 18 per cent of participants, while wilting (WIL) and performance-based feeding (PBF) were not new to any farmer. Total mixed ration (TMR) concepts of cow feeding had the highest adoption rates (40 %), followed by CHF (29 %), WBF (27 %), WFW (27 %) and CAT (22 %). Only 1.6 per cent of participants adopted all the concepts, while 17 per cent of participants did not adopt any of the innovations. Adoption of concepts was hampered mainly by the availability of materials (MAT; 48.3 %), difficulty of the topic (DIFF; 20.1 %) and cost of inputs (COST; 20.1%) (see Figure).

The focus here was on pre and postnatal management to avoid losing the calf and to guarantee a highly productive adult cow. Preparation of the cow in late lactation through steaming up (PREP), the importance of colostrum (COLO), the amount of milk fed according to growth (MILK) and the weaning of calves (WEAN) were new concepts to a majority of training participants who took part in the calf rearing module. 10.3 per cent of participants had no knowledge of rearing calf cows/ heifers. On the other hand, concepts delivered were not new to 12.4 per cent of participants of training. Helminth control was the most widely adopted innovation by 29.6 per cent of participants. Other innovations adopted included PREP, COLO, WEAN and MILK at a respective 25.9, 25, 20.2 and 17 per cent.

A large proportion of participants in the training (37.4 %) did not put into practice the concepts they learned. This was primarily due to the participants not having calves on their herds at the time of training (40.4 %) and difficulty in implementing the innovations, e.g. weighing of the animals to calculate the amount of milk to feed.

Constraints to adoption of training modules

Adoption rates of training content by farmers were at a respective 64, 37, 43, and 39 per cent for fodder production, feed formulation, dairy cow feeding and calf rearing modules respectively. Consequently, the fodder production module was the most adopted of the four modules of training. This was corroborated by a respective 77, 69, 66 and 67 per cent average comprehension of training content for the four training modules. Apart from comprehension of content, other factors influencing the rate of adoption of the module content taught included availability of material, cost of material, land, climate (weather), and difficulty/complexity of content. Availability of material (MAT) and cost of material (COST) were the main hindrances to adoption of module contents, except for the calf rearing module.

The training resulted in an increase of up to 0.7 acres of land surface under fodder production per farm among 70 per cent of trained participants. Consequently, there was increased milk productivity (up to 4 litres/day), and farmers explored conservation of fodder by baling hay and ensiling. An increase of up to 50 bales of hay was reported by 34 per cent of participants, while 41 per cent of respondents reported an increase in silage output from 2,000 to 18,000 kg.

Farmers also earned extra income from the sale of fodder (up to 4,500 Kenyan Shillings, KES), and formulated feed rations at farm level. An increase in daily milk yield of up to 4 litres and a reduction in feed costs of up to KES 1,750 was reported respectively by 80 per cent and 37 per cent of farmers who adopted on-farm feed formulation. The main impact of improved feeding of the dairy cows was increased milk production (see Table). 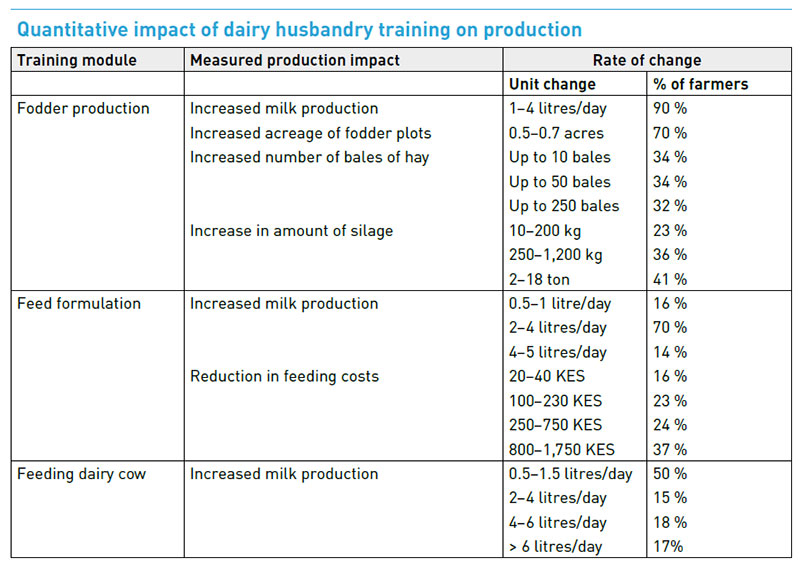 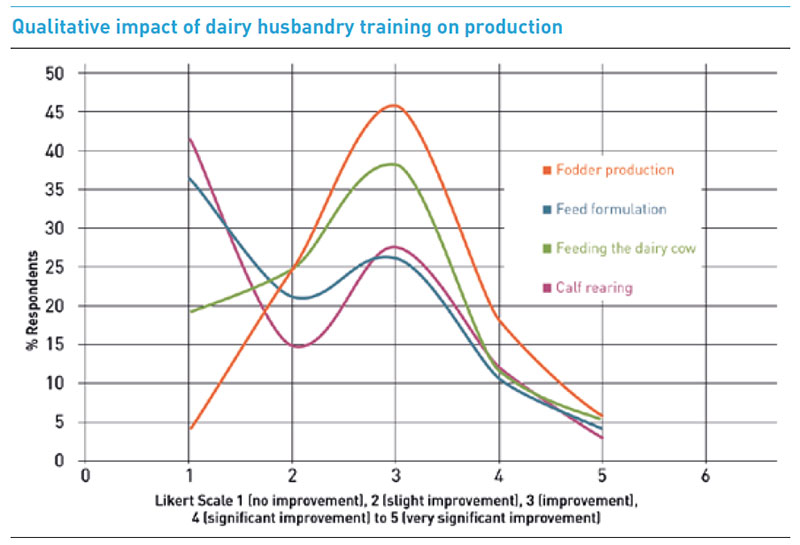 The following conclusions can be drawn from the surveys:

Dr Chrilukovian B. Wasike is a Senior Lecturer and Animal Genetics and Breeding Specialist and Dr Caroline C. Wambui is a Lecturer and Animal Nutrition Specialist. Both are in the Livestock Efficiency Enhancement Group (LEEG) of the Department of Animal Science at Maseno University, Kenya.
Joan Awino is a Dairy Value chain Specialist at GIZ Green Innovation Centres for the Agriculture and Food Sector (GIAE) – GFA Dairy value chain project, Western Regional Office, Kisumu, Kenya. Dr Ulrich Schmidt is the Team Leader at the project.
Contact: wasikebwire@gmail.com